CHANDIGARH: A photograph of a dead Jatin Das printed in The Tribune 90 years ago shook the conscience of the Indian masses and forced the British Empire to change its policy of handing over the bodies of revolutionaries to their kin. 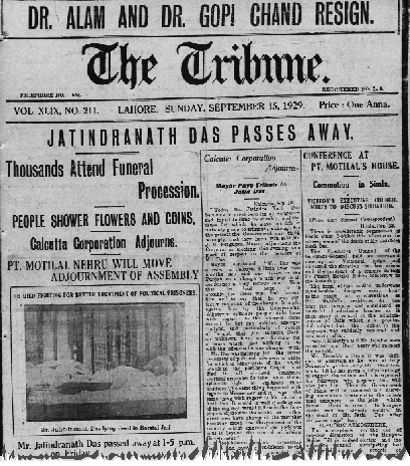 A photograph of a dead Jatin Das printed in The Tribune 90 years ago shook the conscience of the Indian masses and forced the British Empire to change its policy of handing over the bodies of revolutionaries to their kin.

Jatindranath Das (fondly called Jatin), a bomb-maker of Hindustan Socialist Republican Association from Bengal, died while he was being forcefully fed in Lahore’s Borstal Jail on September 13, 1929.

Kama Maclean, Associate Professor of South Asian and world history at the University of New South Wales, Australia, and author of acclaimed book “A Revolutionary History of Interwar India”, says, “Das’ death created a major impact on nationalist politics, as indicated on the first page of The Tribune. After this, the British stopped handing over bodies of revolutionaries to their kin.”

As per contemporary reports, five lakh people had participated in the final procession in Kolkata. Though the news reports don’t mention the source of photograph, it was clicked at the entrance of Borstal Jail. Das’ younger brother Kiron, who was allowed to live with the freedom fighter to take care of him in the jail, noted in a book, “Profile of Martyr Jatin Das”, that the photo was clicked on the evening of September 13 at the entrance of the jail. “After the photo of the dead hero was taken, the bier was bedecked with garlands and flowers,” it said.

Chandigarh-based Harish Jain, one of the editors of the book series on revolutionary movement “Hanging of Bhagat Singh” says that it was after Jatin Das’ martyrdom and the reaction his death evoked that the British refused to hand over bodies of any political prisoners to their kin. “That is why bodies of Bhagat Singh, Rajguru and Sukhdev were secretly cremated at midnight on the banks of the Sutlej.”

Aphotograph in itself was a rare feature in newspapers of those days. On its page 1 on September 17, 1929, The Tribune, which always stood by the national movement, had also carried a half page photo essay with the slug “Lahore’s Tribute to Jatin”. The essay comprised the photos of a sea of people walking with the bier in Lahore’s Anarkali Bazar and women decorating his bier outside the jail. Even before Das’ death, The Tribune was regularly reporting the hunger strike and later deteriorating health of the revolutionaries.

“Jatin Das’ body was given to family, but the Bengal Congress took responsibility to repatriate him back to Bengal. The train stopped at major stations and the body was viewed by many. It caused a sensation in the press and all the way back to Calcutta,” says Maclean.

Excerpts from the report

The Borstal jail is at a pretty long distance from the city. But it did not take long time for the people to gather there. There was a large crowd — bare-headed, solemn and laid…Jatin’s body was buried under a pile of flowers which were wet with scented water. Reclining on the big pillow was his head a mere skull. The bloodless face with the sunken cheeks and eye-balls deep down in the sockets bore traces of the death agony. It was easy to see that he had perished inch-by-inch.

There was the same solemnity in the interior of the city as was noticed in the Anarkali. Not a single shop was open and with the approach sun-set the pall of sorrow cast on the procession deepened…. The special features of the homage paid to Jatin’s memory in the quarter was the showering of coins which some people were noticed picking up with the remark, we will use them as ornaments for children.