SANGRUR: The farmers’ dharna at Cheema Mandi since February 23 in support of their long-pending demands is getting support from area residents, who have been supplying food, milk and other items daily to feed hundreds of protesters. 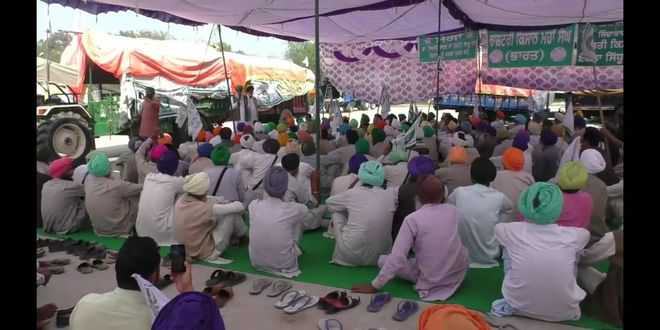 The farmers’ dharna at Cheema Mandi since February 23 in support of their long-pending demands is getting support from area residents, who have been supplying food, milk and other items daily to feed hundreds of protesters.

The protesters cooked food for the initial two or three days but later, residents of surrounding villages took the responsibility of feeding them and taking care of their other daily needs.

“They are not fighting for members of their union only, but for all farmers of Punjab,” said Gurmeet Singh, a farmer of Hero Kalan, who along with other villagers were going back after serving food to protesting farmers.

On February 23, when farmers from various districts of the state were going to New Delhi to voice their long-pending demands under the banner of Rashtri Kisan Mahasangh Bharat, a representative body of 67 farmer organisations from various states, the police intercepted them at various places in Sangrur, Patiala and Mansa. Instead of going back, all converged in Cheema Mandi and started an indefinite protest here on February 23.

“The Mahasangh has called a meeting of its general body at Kurukshetra on March 18-19. During that meeting, we will take a final decision on whether to end our protest. We are facing problems due to lack of washroom, but are getting food, milk from surrounding villages, said Jagjit singh Dallewal, state president of BKU Sidhpur.

Not just villagers, gurdwaras from Cheema Mandi and surrounding villages too have also started serving langar (Community kitchen) to these protesters.

Their main demands include complete debt waiver and the implementation of Swaminathan report.