LUDHIANA: It turned out to be a testing day for the city residents as the spell of moderate to heavy rain that started early in the morning and continued for well over two or three hours, inundated most localities, turning the industrial hub of the state into a ‘water city’. 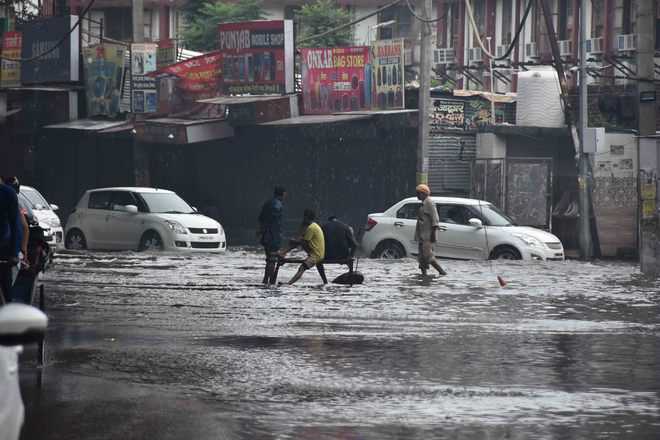 A waterlogged road at Clock Tower after the rain lashed Ludhiana on Tuesday. Photo: Ashwani Dhiman

It turned out to be a testing day for the city residents as the spell of moderate to heavy rain that started early in the morning and continued for well over two or three hours, inundated most localities, turning the industrial hub of the state into a ‘water city’.

The claims of the Municipal Corporation of no accumulation of rainwater at Bhai Randhir Singh Nagar locality during the rain that lashed the city last week because ‘one’ rain harvesting well had been constructed in the area also fell flat as most of the main and feeder roads in the colony were under water, some of these being knee-deep, said the area residents.

Near Dholewal, a cyclist fell down and sustained minor injuries when the front wheel of his bicycle got stuck in a big pothole filled with rainwater.

For many hours after the spell of rain had ended in the morning, the situation was almost desperate in the area of Tajpur Road, Samrala Bypass, Moti Nagar and many other residential localities along Ludhiana-Chandigarh Road and GT Road from Sherpur Chowk to Jalandhar Bypass due to sewage overflow on roads and streets coupled with ongoing construction work of the Sherpur Chowk flyouver.

A huffing and puffing Sukhdev Raj, who was pushing his two-wheeler through rainwater as its engine had seized in keen-deep water at Domoria Pul, said it was always the same sad story after rain. “The drainage system is poor and sewer lines start overflowing even after light rain. One not only has to suffer due to damage caused to vehicles by rainwater but also runs the risk of catching water-borne diseases and skin problems after wading through rainwater mixed with sewage,” he lamented.

Residents of affected areas said the situation was compounded due to blockade at many main roads and highways during the Bharat Bandh call given by Dalit groups and the vehicular traffic taking a detour to avoid the blocked or waterlogged roads.