CHANDIGARH: Widespread rainfall across the state has resulted in damage to life and property as two persons died in Ambala while farmers’ hopes of having a bumper Kharif crop were dashed. 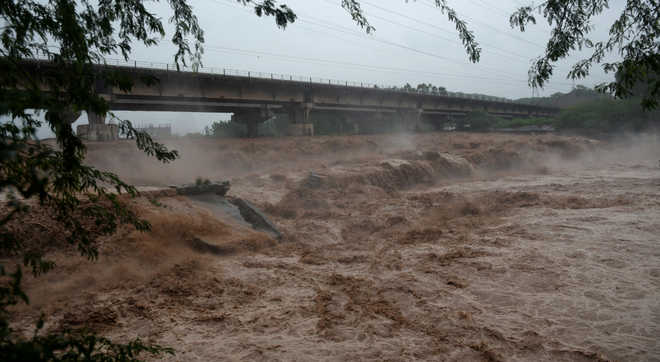 The Ghaggar in spate in Panchkula.

Widespread rainfall across the state has resulted in damage to life and property as two persons died in Ambala while farmers’ hopes of having a bumper Kharif crop were dashed.

Meanwhile, Revenue and Disaster Management Minister Capt Abhimanyu has sought a report on the damage to life and property from the DCs concerned within four days. “The special girdawari for crop loss would also be part of this report,” Capt Abhimanyu said.

Meanwhile, one woman was killed and seven people sustained injuries after a tree fell on a car near Garnala Village. Sources said the victims were on their way from Kot village in Panchkula to Jaggi Colony in Ambala to attend a bhog. As they reached the Ambala-Naraingarh road near Garnala Village, a tree fell down on their car and the driver lost his control over the vehicle, which went off road. The deceased has been identified as Kailasho Devi.

In Hisar, the continuous rain dashed the hopes of farmers to garner a good Kharif crop.

Om Prakash, a farmer of Kheri Barkhi village, said he had lost around two acres of cotton crop due to rain. “I expected a good crop this year. The rain, just at the nick of time when the plucking season is about to start, has completely damaged the crop”, he said.

Vinod Phogat, Deputy Director (Agriculture), Hisar, said reports were still being compiled from the field. “We have received 3,500 complaints of damage to crops under the Pradhan Mantri Fasal Bima Yojna”, he said.

A report from Karnal said heavy rain had put paddy farmers in distress as the standing crop had been flattened across the district. As per the authorities, the early or short-duration varieties suffered the most. The farmers have demanded compensation for the losses. Meanwhile, as many as 300 farmers have approached the Agriculture Department to assess the loss due to rain and demanded compensation under the Pradhan Mantri Fasal Bima Yojana.

The reports of flattened crop have been received from almost every part of the district, said Aditya Dabas, Deputy Director (Agriculture), Karnal. He said early and short-duration varieties, like PUSA-1509 and PR varieties, were the most affected. As of now, the loss has been estimated to be around 15 to 20 per cent and if the situation remained the same in the coming days, it could increase further.

Rishpal Malli, a farmer of Bodsham village, demanded compensation and said his entire paddy crop had been flattened.

In Kurukshetra, the agriculture authorities feared losses of up to 10 per cent.

Karamchand, Deputy Director (Agriculture), Kurukshetra, said the DC had held a meeting on Monday in which the officials were directed to expedite loss assessment exercise.

A field study to assess the damage would be completed in four- five days. Preliminary feedback from various blocks in the district had indicated that about 25 per cent area under paddy cultivation was inundated, he added.