Rain of sops ahead of Assembly polls 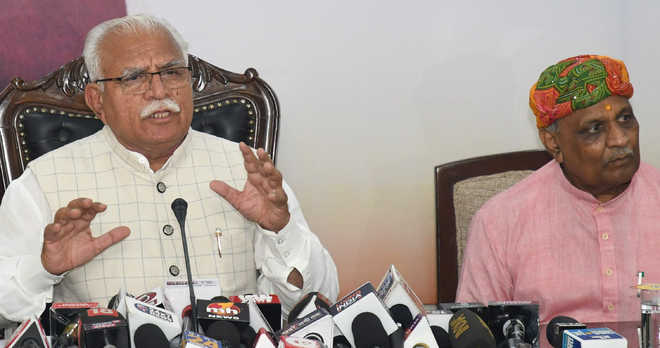 “We got every announcement cleared from the Finance Department. This is unlike the announcements made by the outgoing Congress government of 2014 just before ringing in the elections for which no allocation was ever made or cleared,” Khattar clarified, taking a dig at the rival party and its leadership.

Giving details of the trader-insurance MVSNDBY scheme, the Chief Minister said an insurance cover of Rs 5 lakh would be provided to the traders for any permanent disability or in the case of his accidental death. “They don’t need to go and apply anywhere and they don’t have to pay anything. They will all become beneficiaries based on the data of registered GST traders,” Khattar explained, adding that there were 3.86 lakh beneficiaries in this category.

Under the MVKBY with 3.13 lakh beneficiaries, the stock of the traders will be insured at absolutely no cost to them. “If there is any loss of stock and furniture by fire, burglary, floods and earthquakes, the traders will be compensated on the basis of their turnover,” Khattar said.

Six traders were given insurance certificates to mark the launch of the scheme. Khattar launched the scheme with the click of a button in the presence of chairman of the Traders Welfare Board, SK Jain, PSCM Rajesh Khullar, and Additional Chief Secretary, Excise and Taxation, Sanjeev Kaushal. Khattar said the United India Insurance Company had been picked up after the completion of the tendering process. A premium of Rs. 36.13 crore will be paid by the government.

Commenting on the court's directions to Punjab and haryana to resolve the SYL issue through talks, the Chief Minister said that Haryana has made it clear that it will not compromise on its water share. "This much has been conveyed to Punjab. There is no agenda so far on any further discussion on SYL," he said.

‘Poll code to kick in soon’

Maintaining that this was his last official press conference before Haryana goes to the polls, Chief Minister Manohar Lal Khattar, when asked when the code would come into force, said, “It can happen anytime. The Prime Minister is going to Jharkhand for a rally tomorrow which means it can come into force tomorrow evening or on September 13 or 14.”

Haryana Pradesh Congress Committee president and Rajya Sabha MP Kumari Selja has called the announcements made by Chief Minister Manohar Lal Khattar not more than an effort to again mislead the people of the state. She said for the last five years, the Chief Minister did not bother to ameliorate the lot of the people, but now, at a time when the code of conduct is just going to be imposed, "he has shown a lollipop to the business community, safai karamcharis etc". She said these announcements made at the last moment had no relevance.

In response to a question on the Jan Aashirwad Yatra video clip showing him pulling up a BJP leader, Khattar clarified that if his party leader, without permission or intimation, tried to place a silver crown on his head, he had every right to be angry. “On day one, we had ruthlessly shunned this politics of gold and silver crowns. This is very typically Congress culture and that of some other parties. I have an aversion to this and I am within my right to pull up my own man for thrusting it on me,” Khattar said.