Rains 15% below average in state

CHANDIGARH: After remaining surplus for a brief period last month, the monsoon in Punjab has slipped noticeably below the long-term average with the deficit in rain being about 15 per cent. 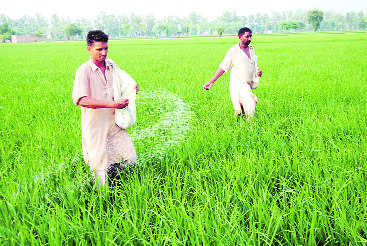 Nine districts have been severely hit due to deficient rains. file

After remaining surplus for a brief period last month, the monsoon in Punjab has slipped noticeably below the long-term average with the deficit in rain being about 15 per cent.

While the deficiency in Punjab is lesser than the neighbouring states of Haryana and Himachal Pradesh where the shortfall is 36 per cent and 25 per cent, respectively, the situation in the region is in sharp contrast to parts of south India that are witnessing severe floods.

Till August 13 this season, Punjab has received a total precipitation of 263.3 mm compared to the long-term average of 308.2 mm, according to data released by the Indian Meteorological Department (IMD) today. Rains and thundershowers, though, were observed at some places in Punjab over the past few days.

In Patiala, Tarn Taran and Faridkot, the rain has been marginally above the long-term average, ranging between two and 11 per cent.

In 13 districts, the rain has been below average, of which nine districts and some border areas are among those severely affected.

With a deficiency of 48 per cent, Hoshiarpur is the hardest hit, followed by Jalandhar with a shortfall of 44 per cent and Amritsar with 41 per cent. Down south, Sangrur and Barnala districts are short by 38 per cent and 33 per cent, respectively, while to their west, the border belt of Ferozepur and Fazilka are facing a deficiency of 31 per cent.

The weather office expects fairly widespread rainfall with isolated heavy falls over the northern plains and the western Himalayan region over the next few days.