NEW DELHI:Army Chief General Bipin Rawat today downplayed troop movement on either side of the Line of Control (LoC), calling it precautionary. 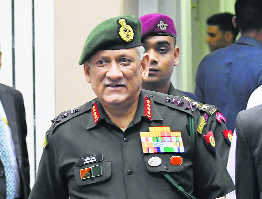 Army Chief General Bipin Rawat today downplayed troop movement on either side of the Line of Control (LoC), calling it precautionary. He was speaking to the media on the sidelines of a function organised by the Society of Indian Defence Manufacturers (SIDM) here.

He said Pakistan deploying additional military resources along the LoC in Jammu and Kashmir over the past few days was normal and not a matter of concern, asserting that Indian troops were prepared to deal with any security challenge in the region. “Everybody takes precaution. Any country will do that, don’t be too concerned about it.”

On whether the hostilities along the LoC were expected to go up in the days to come,  General Rawat replied: “If the adversary wants to activate the LoC, the choice is his”. In military parlance, “activating the LoC” means firing across the LoC, the 749-km line that is de facto boundary between India and Pakistan. On the movement of heavy guns, the Army Chief said: “That is precautionary, don’t get worried. As far as the Army and services are concerned, if anything goes wrong we have to be prepared.”

The Army is on high alert along the LoC to effectively repulse any possible Pakistani misadventure in the wake of India’s decisions on Jammu and Kashmir. Top Army commanders in Jammu and Kashmir are closely monitoring the security situation.

Everybody does precautionary deployment and movement of precautionary resources. We should not get too concerned about it. If the adversary wants to activate the LoC, the choice is his. — General Bipin Rawat, Army Chief