JALANDHAR: Twelve-year-old Komal caught attention of her teachers when she reached her school on Monday for the first time after the recent floods. 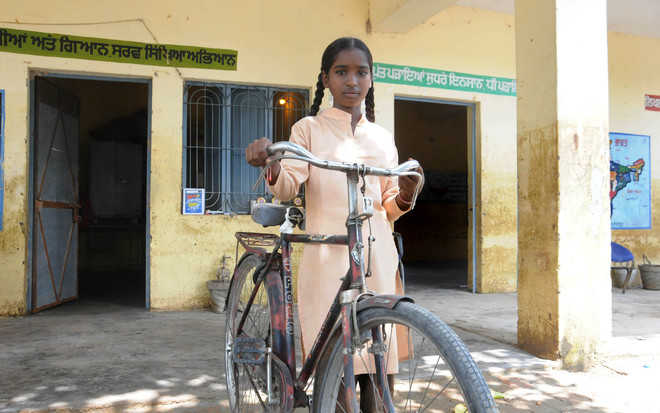 Twelve-year-old Komal caught attention of her teachers when she reached her school on Monday for the first time after the recent floods. While no other student from her village attended the classes at the Government Middle School, Mehrajwala, Komal, a daughter of a labourer, came on a bicycle from her house at Janian Chahal village, located 6 km away.

With roads damaged by the floods, coming to the school was not easy. “I had to get off the bicycle a number of times because of mud, filth and slippery conditions. I almost fell a couple of times. It took me more than 40 minutes to reach the school,” she said.

As there is no middle school at Janian Chahal village, Komal comes to study at Mehrajwala village. Two boys from her village studying in the same school generally accompany her, but they stayed away due to the poor road condition. However, doughty Komal did not let the problem stop her.

“My parents told me that I must go to the school. Also, I love to study. The bicycle, which I regularly use for commuting, is my strength which keeps me moving in every situation,” she said.

“I want to become a doctor or join the police. I feel there should be someone to protect the people who come from economically weak families,” she said. Talking about her plight, Komal said her parents, siblings and she stayed in knee-deep water after the floods. Their kutcha house has also developed cracks.