NEW DELHI: The Supreme Court on Thursday quashed the second FIR against BJP MP Anurag Thakur and Himachal Pradesh Cricket Association (HPCA) in a case related to alleged encroachment of 720 square yard government land for the construction of the indoor stadium besides Dharamsala cricket stadium. 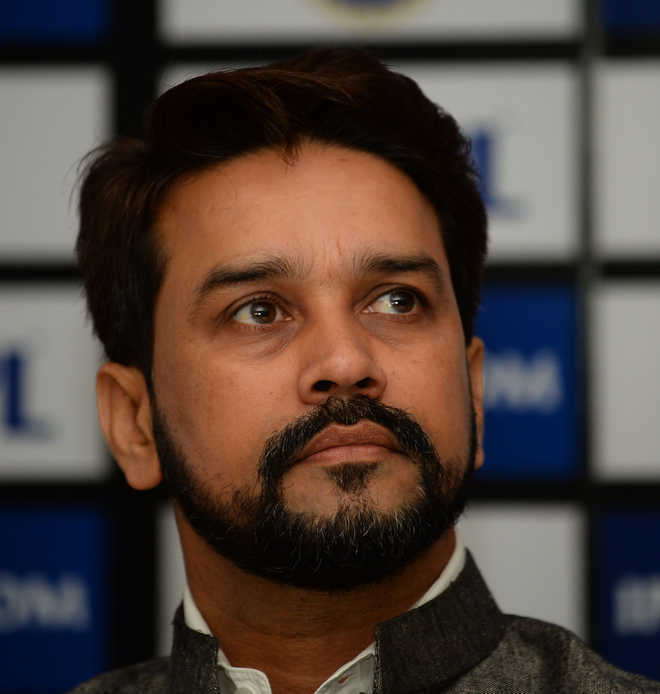 The Supreme Court on Thursday quashed the second FIR against BJP MP Anurag Thakur and Himachal Pradesh Cricket Association (HPCA) in a case related to alleged encroachment of 720 square yard government land for the construction of the indoor stadium besides Dharamsala cricket stadium.

A bench of Justices A K Sikri, Ashok Bhushan and SA Abdul Nazeer said, "we are quashing the FIR" saying that there was no criminality involved in the transfer of land on lease.

The FIR was lodged on October 3, 2013 against Thakur, HPCA, two IAS officers, officials of state education department and others for offences under Prevention of Corruption Act and destruction of public property.

Police had claimed that Thakur, who was then president of HPCA and others in connivance with state government officers had demolished the two-storeyed building belonging to education department and the land measuring 720 square yards was illegally taken over by the HPCA.

The central government had refused to grant prosecution sanction against two IAS officers accused in the case and charge sheet was not filed against them.

During the hearing, senior advocate P S Patwalia, appearing for Thakur and others said their was no illegality involved in the case and every thing was done in accordance with law.

He said the case against Thakur and others was nothing but a political vendetta by the then state government and even the central government has refused to accord prosecution sanction against the accused officials saying every thing was done by them as part of their official work.

Patwalia said the arguments, which were raised by them before the high courts and were not accepted by it were accepted by the apex court in its earlier judgement dated November 2, in which the main FIR in the case was quashed.

Advocate D K Thakur, appearing for former chief minister Virbhadra Singh, who was made party in the case by HPCA said that the BJP MP and others have tried to mislead the court by submitting wrong facts that 720 square yard was part of the original lease given for the land for cricket stadium.

He said government land was illegally given to HPCA without following the due procedure of law and in connivance with the government officials.

To this, the bench asked the Singh's advocate Thakur to explain as where was the criminality involved in the case.

He replied that there was criminal intent involved as the building which was demolished was not in dilapidated state and people were residing there.

He pointed out that No Objection Certificate (NOC) was wrongly given by the officials of Town and Country Planning (TCP) Department for use of the land for cricket related activities.

The bench said that it gone through the records and did not found any criminality involved and therefore it quashes the FIR lodged against the accused.

The bench Thursday accorded detailed hearing on the appeal filed by HPCA against the High Court order as on November 19 it had said FIR in question was quashed in its November 2 verdict by 'mistake'.

Earlier this year, the BJP government in Himachal Pradesh had taken a decision to withdraw all political cases including the HPCA cases which were lodged by previous Congress government.

The HPCA has moved the apex court against the order of High Court dated April 6, 2017 refusing to quash the FIR and asking them to raise their objections during trial.

Veteran Congress leader Virbhadra Singh has sought recall of its November 2 order in which the FIR related to alleged encroachment of land was quashed by "mistake".

On November 2, the apex court had quashed two FIRs against Thakur, his father and former Himachal Pradesh chief minister Prem Kumar Dhumal and others in two separate cases -- one related to alleged irregularities in granting land on lease for the construction of the Dharamsala cricket stadium and another pertaining to alleged encroachment of government land.

Senior BJP leader Anurag Thakur and others had told the court that there was no need to recall the order as the main FIR was already quashed by the court.

Thakur, Dhumal and the HPCA had challenged in the apex court the orders of the Himachal Pradesh High Court refusing to quash the FIRs registered against them during the erstwhile Virbhadra Singh-led Congress government in the state.

Thakur, the Bharatiya Janata Party (BJP) MP from Hamirpur in Himachal Pradesh, had earlier claimed in the apex court that the cases were actually related  to a civil dispute but the then Singh-led government had made those criminal cases for political reasons, a charge refuted by the Congress leader.  - PTI