NEW DELHI: Seafloor predators and open water feeding animals like the starfish and the jellyfish will benefit from climate change, while those associated with sea ice for food or breeding are most at risk, a study said on Thursday. 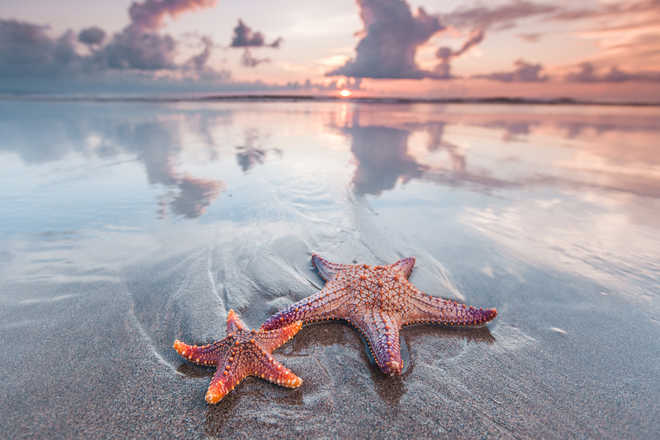 The starfish and the jellyfish will benefit from climate change, while those associated with sea ice for food are most at risk. — iStock

Seafloor predators and open water feeding animals like the starfish and the jellyfish will benefit from climate change, while those associated with sea ice for food or breeding are most at risk, a study said on Thursday.

Marine Antarctic animals closely associated with sea ice for food or breeding, such as the humpback whale and emperor penguin, are most at risk from the predicted effects of climate change, according to the study published in the journal Frontiers in Marine Science.

Using risk assessments like those used for setting occupational safety limits in the workplace, scientists from the British Antarctic Survey (BAS) determined the winners and losers of Antarctic climate change impact, which includes temperature rise, sea ice reduction and changes in food availability.

They show that seafloor predators and open water feeding animals, like starfish and jellyfish, will benefit from the opening up of new habitats.

"One of the strongest signals of climate change in the Western Antarctic is the loss of sea ice, receding glaciers and the break up of ice shelves," said lead author Simon Morley from the BAS.

"Climate change will affect shallow water first, challenging the animals who live in this habitat in the very near future. While we show that many Antarctic marine species will benefit from the opening up of new areas of sea floor as habitat, those associated with sea ice are very much at risk."

A growing body of research on how climate change will impact Antarctic marine animals prompted the researchers to review this information in a way that revealed which species were most at risk.

"We took a similar approach to risk assessments used in the workplace, but rather than using occupational safety limits, we used information on the expected impact of climate change on each animal," said seabird ecologist Mike Dunn, co-author of the study, which forms part of a special article collection on aquatic habitat ecology and conservation.

"We assessed many different animal types to give an objective view of how biodiversity might fare under unprecedented change." They found that krill—crustaceans whose young feed on the algae growing under sea ice—were scored as vulnerable, in turn impacting the animals that feed on them, such as the adelie and chinstrap penguins and the humpback whale.

The emperor penguin scored as high risk because sea ice and ice shelves are its breeding habitat.

Dunn added: "The southern right whale feeds on a different plankton group, the copepods, which are associated with open water, so it is likely to benefit. Salps and jellyfish, which are other open water feeding animals are likely to benefit too." The risk assessment also revealed that bottom-feeders, scavengers and predators, such as starfish, sea urchins and worms, may gain from the effects of climate change.

"Many of these species are the more robust pioneers that have returned to the shallows after the end of the last glacial maximum, 20,000 years ago, when the ice-covered shelf started to melt and retreat," said co-author David Barnes.

"These pioneer species are likely to benefit from the opening of new habitats through loss of sea ice and the food it provides." — IANS