JAMMU: Security forces have been put on “highest alert” in Jammu ahead of the Amarnath yatra following reports of militants planning to target the pilgrimage. 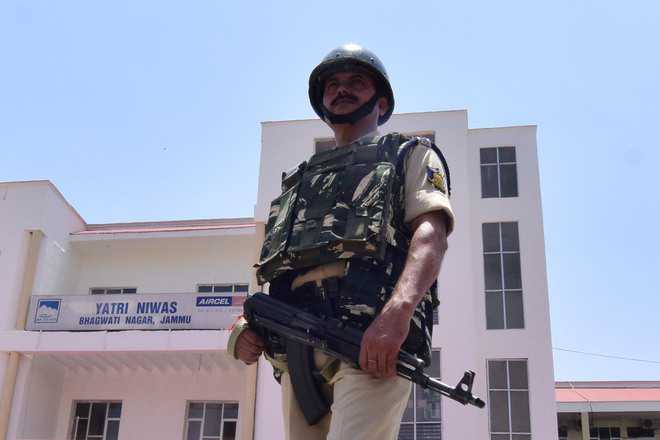 Security forces have been put on “highest alert” in Jammu ahead of the Amarnath yatra following reports of militants planning to target the pilgrimage.

The 46-day Amarnath Yatra to the holy cave shrine of Lord Shiva in the south Kashmir Himalayas will begin on June 30.

“Security has been beefed up and an extensive and a foolproof plan has been prepared by the security forces to ward off any threats,” a source said, adding that all vehicles entering the Bhagwati Nagar area of Jammu city — the base camp of Yatra — were being checked thoroughly, while additional deployment had been made at all sensitive points”.

The Senior Superintendent of Police (SSP) Jammu Tajinder Singh said, “We have made foolproof arrangements for the yatra with sufficient deployments of forces. We are also working in close coordination with all agencies. All necessary precautions have been put in place.”

The police have established checkpoints where regular inspections are being conducted, while the Central Reserve Police has been deployed in large number at the base camp of the yatra in Bhagwati Nagar.

Deputy Commissioner Ramesh Kumar too said that the administration had made all arrangements at the Bhagwati Nagar base camp, including installation of CCTVs in view of the yatra.

The renovation work at the base camp has also been completed by installing new air conditioners in halls and facelift given to washrooms, the DC said.

Sources said the Union Home Ministry had told the state administration to ensure all security arrangements in place well ahead of the start of the yatra. Around 450 companies of paramilitary forces had been deployed in the state, from Lakhanpur to the cave shrine.

Pertinently, Union Home Minister and BJP national president Amit Shah had chaired a high-level meeting to review the security arrangements for the yatra, especially against the backdrop of the recent terror attack on the CRPF convoy in Anantnag that claimed the lives of five CRPF jawans and a official of the J&K Police.

Srinagar: Union Home Minister and BJP president Amit Shah will arrive on a day-long visit to Kashmir Valley on June 30, sources here said. The Union Minister will pay obeisance at the Amarnath shrine on June 30, a day ahead of this year’s annual Amarnath Yatra beginning officially on July 1. This would be Shah’s first visit to Jammu and Kashmir after he took over as the Home Minister in the Modi 2.0 government. IANS