The inability or unwillingness of selfish leaders to see the bigger picture or the threats to the land can cause irreparable damage to a well-functioning nation. 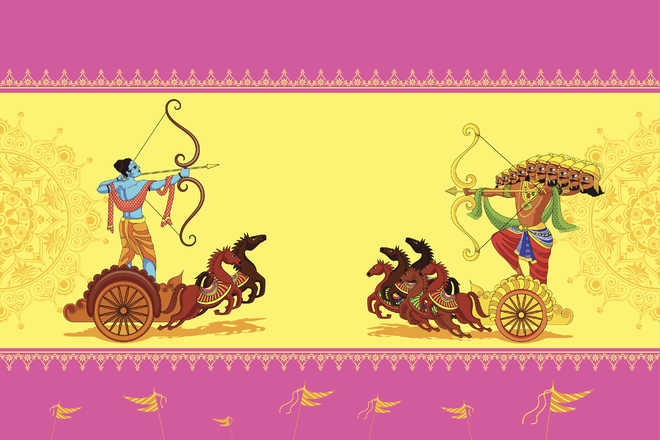 The inability or unwillingness of selfish leaders to see the bigger picture or the threats to the land can cause irreparable damage to a well-functioning nation.

Indian epics Ramayana and Mahabharata show how Ravana and Duryodhana, respectively, went from a path of prosperity to one of destruction due to their horse vision.

In the Ramayana, the crowning of Vibheeshan as the King of Lanka before the Rama-Ravana battle sent a clear indication to Asura King Ravana and the people there that Lord Rama was not interested in ruling over Lanka.

Rama was marching towards Lanka just to rescue his wife Goddess Sita from Ravana’s custody. But Ravana — due to his lust for Sita — didn’t want to give her up even when it meant risking the golden kingdom of Lanka and the lives of its people.

In his overconfidence, Ravana couldn’t realise his weaknesses in comparison to the strengths of Rama and his Vaanara army from the inputs he got.

First, a single Vaanara, Hanuman, destroyed Lanka’s Ashokvatika, killed many warriors and finally, set fire to Lanka. Secondly, Vaanara King Sugriva had jumped at Ravana and knocked off his crown when the Vaanara army had just landed in Lanka.

Thirdly, Vaanara prince Angad, who had come as a peace messenger, humiliated all Asura warriors in Ravana’s court. Many Asuras tried to uproot Angad’s foot from the floor but all of them failed.

Ignoring the messages of peace sent by Rama and the sane advice given by some well-wishers, Ravana pushed the nation to an unnecessary war and the subsequent destruction.

In the Mahabharata, Kaurava prince Duryodhana was not happy with getting half the kingdom of Hastinapur.

Duryodhana was not eligible to rule even half the kingdom for two reasons. First, his uncle Pandu had been the previous king and his father Dhritrashtra was just the caretaker king in the former’s absence. Secondly, Pandu’s son Yudhisthira was the eldest amongst the 105 Kaurava and Pandava princes.

Just because Dhritrashtra was the caretaker king and the Pandavas were not the ones to disrespect their uncle’s wish, Duryodhana got half the kingdom.

But in his greed for the Pandava half of the kingdom or his desire to see the Pandavas in misery, Duryodhana first organised the game of dice. With help from uncle Shakuni, he cheated the Pandavas of their kingdom. To add salt to the wound, he humiliated the Pandavas’ common wife Draupadi at the Hastinapur court.

Later when the Pandavas had completed their 13 years of exile according to the rules of the game of dice, he refused to return half of their kingdom.

Duryodhana failed to make a correct estimation of the Pandava prowess even when the signs were in front of his eyes. First, the Pandavas had to rescue Duryodhana and his merrymakers from Gandharva captivity in Dwaitavana. Secondly, the Pandavas had warded off a double attack on Matsya in the 13th year of their exile.

In his greed to get it all, Duryodhana caused the deaths of lakhs of warriors and soldiers on both sides.