CHANDIGARH:In a major jolt to the INLD in Haryana, Charanjeet Singh Rori&mdash;the party&rsquo;s Sirsa MP from 2014 to 2019&mdash;joined the Congress today. 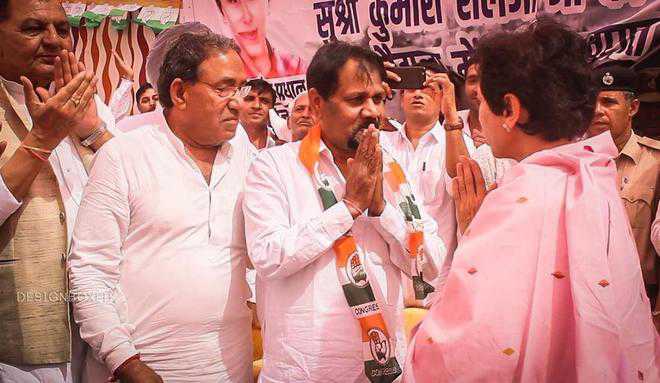 Former MP Sushil Indora joins the Congress in the presence of Kumari Selja in Sirsa on Tuesday.

In a major jolt to the INLD in Haryana, Charanjeet Singh Rori—the party’s Sirsa MP from 2014 to 2019—joined the Congress today.

Dr Sushil Indora, another former MP of the INLD from Sirsa, also joined the Congress today, though he had quit the INLD in 2009.

Indora, who remained MP for two terms from 1998 to 2004, had joined the Congress after quitting and in 2016 he had formed his own outfit Aapni Democratic Party (ADP).

Rori joins the party at a time when former state Congress president Ashok Tanwar resigned from the primary membership of the party. Rori can now hope of being fielded by the Congress from Sirsa in the next Lok Sabha elections.

Dr Indora, too, had been trying to get ticket for Sirsa from the Congress in 2014, but he had quit the party after the party decided to go with Tanwar again.

Tanwar had won the Sirsa Lok Sabha seat in 2005 and contested this seat in 2009 and 2014 unsuccessfully. Before 2005, Selja had won the seat twice and her father Dalbir Singh had been elected from Sirsa on three occasions.

Speaking on the occasion, Rori said the Congress was the only viable alternative in the state. He said he hoped that the party would wrest power from the BJP, which has failed to deliver on various fronts. After a vertical split in the INLD last year owing to a feud in the Chautala clan, the party has been virtually decimated. Most of its leaders and legislators have switched to other parties, including the BJP, Congress and Jannayak Janta Party — a breakaway faction of the INLD.