‘Chennai taught me how to counter dew’

Nagpur: Countering the dew in the sultry Chennai heat has been a big part of Deepak Chahar’s cricket education and he said it showed during his world record figures of 6/7 against Bangladesh in the third T20I. 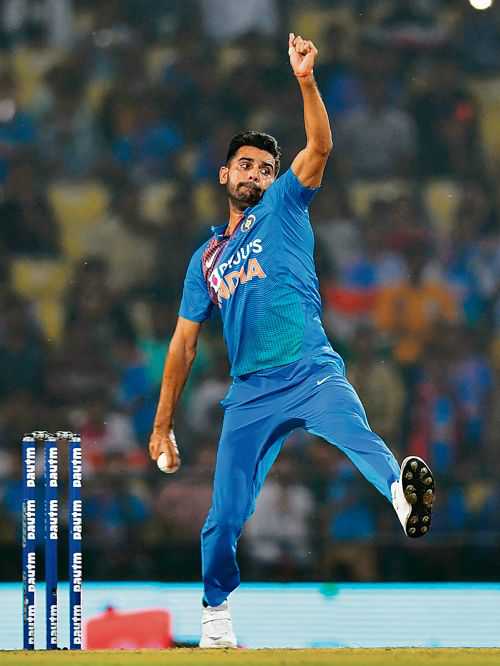 Nagpur: Countering the dew in the sultry Chennai heat has been a big part of Deepak Chahar’s cricket education and he said it showed during his world record figures of 6/7 against Bangladesh in the third T20I. Chahar, who also became the first male cricketer from the country to take a T20I hat-trick, has been one of the Super Kings’ successful new ball bowlers, used judiciously by captain Mahendra Singh Dhoni. “Playing in Chennai, I have now realised how to counter dew and sweat. How to keep my hands clean,” the 27-year-old Rajasthan seamer said during an interview on ‘Chahal TV’ hosted by teammate Yuzvendra Chahal for the BCCI’s official website. Asked what was his strategy considering that there was no nip in the air and the ball wasn’t swinging a lot, Chahar said: “The side boundaries (at VCA Stadium) were big, and that was the plan that we will have to force the batsmen to play shots towards the sides. I also wanted to vary the pace as the ball was getting wet because of the dew and it was difficult to grip.” PTI

Dubai: India fast bowler Deepak Chahar has moved up 88 slots to 42nd in the latest ICC T20 rankings for bowlers. The list, however, continued to be led by slow bowlers. The top-five and eight of the top-nine are spinners. Mitchell Santner reached second place, behind Afghanistan’s Rashid Khan. PTI