Mirabai betters own national record but misses out on medal

PATTAYA:Former world champion Mirabai Chanu bettered her own national record but missed out on the podium, finishing a creditable fourth, in the women’s 49kg event at weightlifting’s World Championship. 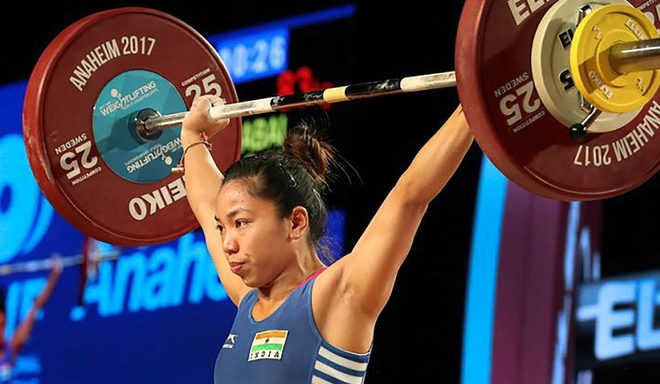 In the snatch, Mirabai Chanu lifted 87kg followed by 114kg in clean and jerk for a total of 201kg. File photo

Former world champion Mirabai Chanu bettered her own national record but missed out on the podium, finishing a creditable fourth, in the women’s 49kg event at weightlifting’s World Championship. The 25-year-old Mirabai lifted a personal best in all the three sections. In the snatch, she lifted 87kg followed by 114kg in clean and jerk for a total of 201kg.

Mirabai’s earlier national record was 199kg (88kg+111kg) which she recorded in the Asian Weightlifting Championship in China in April. The gold medal went to Jiang Huihua of China, who set a new world record with an effort of 212kg (94kg+118kg). The earlier record of 210kg was held by Hou Zhihui of China.

The other Indian in the fray, Sneha Soren, finished second in Group D of the women’s 55kg event. The 18-year-old lifted a total of 173kg (72kg+101kg) to be placed second in the eight-woman field of the easiest group competition. In the snatch section, Sneha finished fifth after lifting 72kg. However, she was ranked No. 1 in the clean and jerk category for her effort of 101kg. Her final standing will be determined after the end of Group A proceedings. — PTI