Scramble on to put Nehru Stadium in order

NEW DELHI:At a press conference here two days ago, Indian football federation (AIFF) president Praful Patel declared that India was 100 per cent ready to host the U-17 World Cup, which begins on October 6. 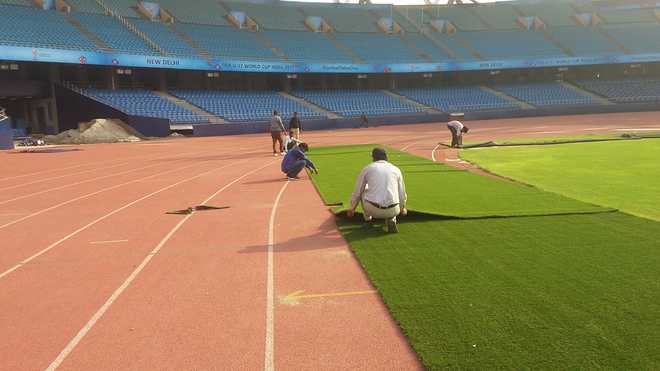 At a press conference here two days ago, Indian football federation (AIFF) president Praful Patel declared that India was 100 per cent ready to host the U-17 World Cup, which begins on October 6. Patel had said that work on all six venues across India had been completed as per the requirements of FIFA, the sport’s world governing body.

However, a visit to the Jawaharlal Nehru Stadium today revealed that significant work remains to be done in the most visible parts of the stadium, ie right close to the playing area. Workers are scrambling to complete the job and there are heaps of sand and other construction material all around. As is the usual practice in India — which was seen before the 2010 Commonwealth Games too — work is likely to finish only at the last minute. This highlights the old tendency in India of completing the infrastructure work right before an event is to start.

The 55,000-capacity Nehru Stadium, which will host eight matches including the Indian team’s league fixtures, had far from a finished appearance today. The stadium’s broken, damaged synthetic athletics turf which runs around the field of play is in a bad shape. Today the groundsmen were laying down artificial synthetic grass to cover the ugly, broken patches of the synthetic track.

Construction material lay scattered outside at least three entry gates of the stadium. The maintenance staff of the Nehru complex could be seen cleaning the dirt and gravel patches on the turf by hand.

This last-minute scramble to get the house in order shows that the organisers in Delhi — the national capital, no less — have not learnt any lessons from the 2010 Commonwealth Games, which was marred by several construction delays, and also below-par construction quality.

FIFA had confirmed India as the tournament’s host nation way back in December 2013. More recently, between June and August this year, the World Cup’s Local Organising Committee (LOC) had cleared all six venues, including the Nehru Stadium, to host the matches after expressing its satisfaction over the progress of work.

“This whole work of repairing the damaged turf and putting artificial grass so close to the playing field would take at least 3-4 days,” a local contractor, who didn’t wish to be named, told The Tribune. “It’s not that easy to cover these patches since we need to first flatten them out before laying the artificial grass. About the scattered construction material, there’s another contractor looking after that work. The stadium would only be ready by October 2-3.”

Why is the track, which was laid for the Commonwealth Games, in such a bad state? According to experts, the shelf life of a synthetic track is between 8 to 10 years, depending on wear and tear. The stadium’s track has lasted for less than eight years. In fact, right before the 2010 CWG was to start, sections of the track were already discovered to be damaged. Now it seems the time has come for the Sports Authority of India (SAI) to invite tenders for replacing the turf. The Nehru Stadium was renovated just before the Delhi CWG in 2010 at a staggering, incredible cost of Rs 961 crore.

Not our responsibility: SAI

When SAI officials were approached for their response to the continuing construction work at the stadium, they informed that the stadium was handed over to the World Cup LOC on September 16. The officials said that the LOC had committed to completing the pending work on its own. “The LOC should take care of the facility. We are no longer accountable,” was how a SAI official reacted.

For the record, FIFA is spending Rs 90 crore on the organisational part of the tournament. The central government has given an additional Rs 120 crore to the six state governments hosting the matches, to be spent on the development of infrastructure. While Rs 95 crore is allocated for the renovation and related work, Rs 25 crore is earmarked for miscellaneous expenses.

When the LOC’s tournament director, Javier Ceppi, was once asked about the renovation work at the six stadiums, he had this to say: “We understand that there is a tendency of last-minute preparedness and completion of infrastructure and last-minute running around. Fortunately, this seems not to be the case in this tournament at least.” However, it seems that Delhi is proving him wrong.