PANCHKULA: Former Deputy Chief Minister and Congress candidate Chander Mohan today said if the Congress government came to power in the state, the Seventh Pay Commission would be implemented in Haryana on the lines of the Punjab Government. 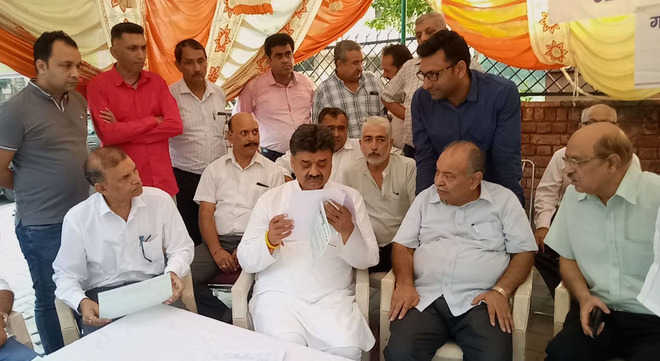 Former Deputy Chief Minister and Congress candidate Chander Mohan today said if the Congress government came to power in the state, the Seventh Pay Commission would be implemented in Haryana on the lines of the Punjab Government.

Chander Mohan today met various government employees, who apprised him about the shortage of government houses in the city as most them were presently living in private rental accommodation.

After the formation of the Congress government there would be specific focus on the upliftment of living conditions of employees across the state, especially in Panchkula, which had the largest share of the staff as maximum government offices of Haryana were located in the city, said Mohan.

He expressed his dismay when employees informed him that despite repeated requests and representations their basic need of a decent housing had gone unheard and totally neglected by the sitting MLA, Gian Chand Gupta.

In the last five-year rule of the BJP government thousands of employees were beaten by the police, he added. Every time employees protested for their genuine demands all they have got from the government was tear gas shells and lathi-charge and this was about to change on the 24th of this month, claimed Mohan.

Meanwhile, Seema Bishnoi and Siddharth Bishnoi during their campaigning for Chander Mohan met scores of young first-time voters and motivated them to come forward and vote for the Congress on October 21.

They apprised people of the vision document of Chander Mohan for Panchkula and assured them that they could finally look forward to overall development of the city, which neglected during the last five years.