Stop work on Kartarpur corridor, have no talks with Pak at all: Swamy

CHANDIGARH: BJP MP Subramanian Swamy on Saturday said the work on the Kartarpur corridor project should be stopped in the interest of the nation and there should be no talks with Pakistan on any issue. 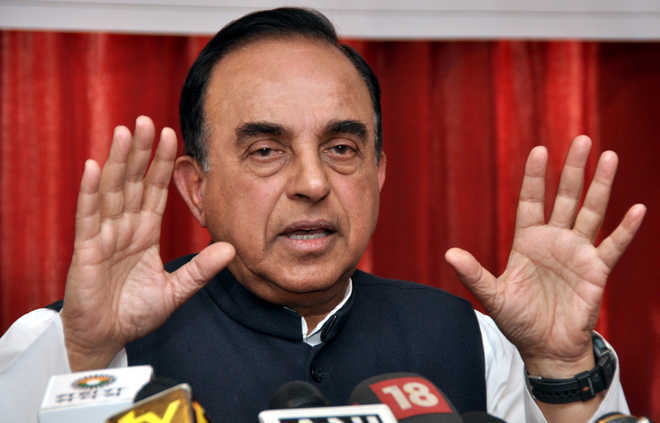 BJP MP Subramanian Swamy on Saturday said the work on the Kartarpur corridor project should be stopped in the interest of the nation and there should be no talks with Pakistan on any issue.

“In my view, in the interest of the nation, the work (on Kartarpur corridor) should not move ahead. Whatever work has taken place (on the project), let it stop there,” said Swamy, talking to reporters on the sidelines a seminar here.

Asserting that there should be no talks with Pakistan on any issue, Swamy said the neighbouring country should not be given any excuse, including the Kartarpur corridor project, for for any talk.

“We should not give any excuse to Pakistan for dialogue on any issue and show it to the world. They have not stopped terrorism and have not handed over to us those who have been hiding there after committing crimes here. We should not have any relation with Pakistan,” he added.

Asked if Sikhs’ sentiment would not be hurt on stopping the Kartarpur corridor project, Swamy said, “I understand Sikhs’ sentiments very well and I have always supported Sikhs.”

“Sikhs should understand that Pakistan’s intentions are bad and they have to be set right first,” he said.

In a major initiative last November, both India and Pakistan had agreed to set up the Kartarpur corridor to link the historic Gurdwara Darbar Sahib—the final resting place of Guru Nanak Dev—to Dera Baba Nanak in Gurdaspur.

The corridor will be opened in November in connection with the 550th birth anniversary of Guru Nanak Dev.

“The main thing is that the income tax should be abolished. The rate on fixed deposits should be increased to 9 per cent and the rate of interest on borrowings should be brought down to 9 per cent as well. If these three steps are taken, things will improve,” said Swamy, talking to reporters here.

He said he is also coming up next month with a book, suggesting steps to spur economic growth.

Swamy made the remarks when asked if the steps taken by Finance Minister Nirmala Sitharaman would revive the growth. — PTI