NEW DELHI: On July 20, 1969, American astronauts Neil Armstrong and Edwin "Buzz" Aldrin became the first humans ever to land on the Moon aboard the Apollo 11 mission—an extraordinary feat celebrated by Google with a Doodle video on Friday. 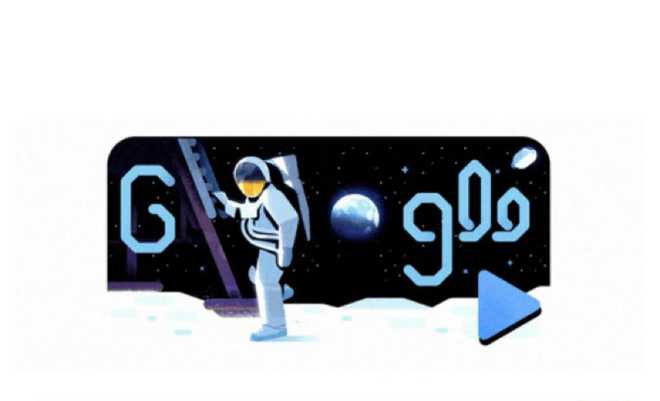 A screenshot of Google Homepage.

On July 20, 1969, American astronauts Neil Armstrong and Edwin "Buzz" Aldrin became the first humans ever to land on the Moon aboard the Apollo 11 mission—an extraordinary feat celebrated by Google with a Doodle video on Friday.

The Doodle video is in the voice of Command Module Pilot (CMP) Michael Collins who remained aboard the command module in lunar orbit while Armstrong and Aldrin became the first humans to set foot on the Moon.

As he took his first step, Armstrong famously said: "That's one small step for man, one giant leap for mankind." The Apollo 11 mission occurred eight years after President John F. Kennedy (1917-1963) announced a national goal of landing a man on the moon by the end of the 1960s.

An estimated one million people gathered on the beaches of central Florida to witness first-hand the launch of Apollo 11, while more than 500 million people around the world watched the event live on television, NASA said in a statement.

The two astronauts spent more than 21 hours on the lunar surface deploying scientific experiments and gathering samples before returning to the orbiting command module, piloted by Collins.

In a series of special events, NASA is marking the 50th anniversary of the Apollo programme—the historic effort that sent the first US astronauts into orbit around the Moon in 1968, and landed a dozen astronauts on the lunar surface between 1969 and 1972.

For the first time in half a century, NASA's "Artemis" missions will allow scientists and engineers to examine the lunar surface from up close.

"This will teach us how to move safely across lunar soil, known as regolith; how to build infrastructure on top of it; and how to keep humans safe in space. The techniques scientists will develop on the Moon will make it possible for humans to safely and sustainably explore farther destinations, such as Mars," said NASA. — IANS