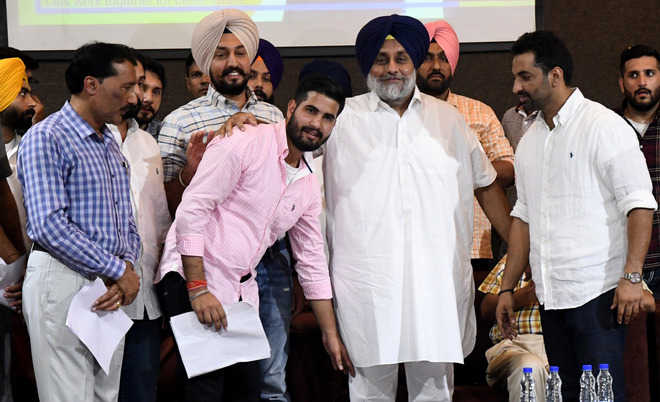 He was in the university to attend the oath-taking ceremony of newly elected Panjab University Campus Students’ Council (PUCSC) president Chetan Chaudhary. The SAD leader also promised Rs 5 crore for students’ welfare, if his party comes to power in the next Assembly elections.

On September 6, Chetan Chaudhary of the Students’ Organisation of India (SOI) had won the students’ council elections in alliance with PUSU, ISA and HIMSU. The SOI is the student-wing of the SAD.

On Friday, Chetan Chaudhary did not attend the oath-taking ceremony organised by Panjab University. “I told the authorities that I will take the oath only when the PU gives a special chance of examination to science students. As per the UGC, students need 80 per cent credits to be promoted to the next year. Those who did not fulfil the criteria have been asking for a special chance,” he explained.

While Chaudhary took his oath, Sukhbir Badal reminisced his Panjab University days. “I have studied here for four years. Like those days, today I took to my favourite routes and gehris in the PU,” he said.

He said he had last visited the PU in 2015 when the SOI had won. “We were the ruling party in Punjab back then and I gave Rs 10 crore for the students’ welfare. We got solar panels installed at hostels. We also got a gym made for girls near the girls’ hostels,” he said. However, on being told that the gym building was lying vacant for the past three years sans equipment, Badal promptly announced Rs 25 lakh for getting the equipment.

Badal urged the students to pursue education in all seriousness. “Education is the most important thing. My father once told me that, no matter how much land or property one has, it can all go in one day. However, if you have education you can look after your family even if you have nothing.”