The lead-up to the Radcliffe award

The midnight rain had given way to an early morning drizzle when on July 8, 1947, Sir Cyril Radcliffe arrived in Delhi to head the Boundary Commission to demarcate the boundaries between India and Pakistan. 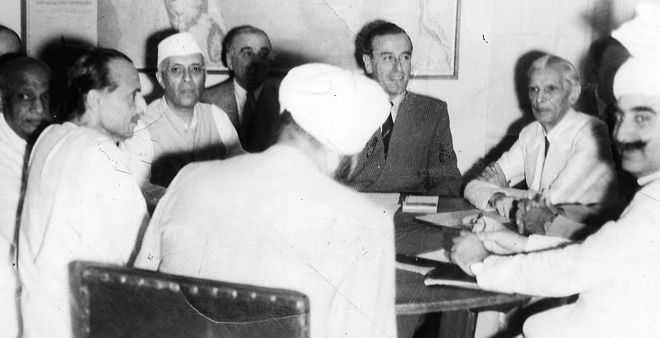 The midnight rain had given way to an early morning drizzle when on July 8, 1947, Sir Cyril Radcliffe arrived in Delhi to head the Boundary Commission to demarcate the boundaries between India and Pakistan. Radcliffe was given the audience by the Governor-General and Viceroy, Lord Mountbatten, on July 10, 1947, and modalities to divide India were crystallised. Radcliffe meticulously avoided meeting political leaders and advised them to present their vaulting demands in the formal sittings of commission in Lahore and Calcutta.

Lord Listowel, the then Secretary of State for India (Mountbatten’s boss), had proposed the name of Sir Cyril Radcliffe, the then Vice-President of the London Bar Association, for appointment as head of the Boundary Commissions for both Punjab and Bengal. Both Nehru and Jinnah agreed to his appointment.

The division of boundaries between West and East Punjab and between East and West Bengal was the most contentious and vexed issue between the Congress and the Muslim League. Jinnah initially wanted the United Nations Organisation to divide the two nations, but later discarded the idea as UNO procedures were found to be lengthy.

The Bengal Boundary Commission consisted of Justice Abu Saleh Akram and Justice SA Rehman (League nominees) and Justice CC Biswas and Justice BK Mukherji (Congress nominees). All nominees were high court judges. Both the boundary commissions were constituted before the arrival of Radcliffe.

Christopher Beaumont, ICS (1936  batch-Punjab), was appointed the Radcliffe Commission’s secretary and KVK Sundaram, ICS (1927-Central Provinces), as OSD to the commission. He was OSD to the Governor-General and Viceroy of India at that time. VD Aiyer from the Viceroy’s office became assistant secretary of the commission. Sundaram’s father-in-law, Sardar Harbans Singh, was a rich Jat Sikh landlord of Amritsar. Radcliffe had close ties with Sundaram and his wife.

Radcliffe visited Calcutta and Lahore. But in view of the fact that he was chairman of both commissions, whose proceedings were taking place simultaneously, he did not attend the public sittings but made arrangements to study daily the record and material submitted. The public sittings relating to Sylhet district were held from August 4 to 6.

Both in Lahore and Calcutta, the public sittings were held in their respective high courts. As both commissions did not reach an agreement, Radcliffe alone gave the awards, demarcating the boundaries of Punjab, Bengal and Sylhet district of Assam and, thus, of India and Pakistan. Mountbatten released the awards on August 16, 1947.

The Muslim League made the unreasonable demand of virtually the whole of Punjab to be included in Pakistan as it was a Muslim-majority state, but later pruned it to 24 districts of the pre-Partition Punjab, leaving the five districts of Ambala Division — Ambala, Karnal, Rohtak, Hisar and Gurgaon — for India.

However, the extortionate ambition turned into smouldering desire when the award was announced. It raised significant objections regarding the award as the tehsils of Ferozepur and Zira in Ferozepur districts, Nakodar and Jalandhar in Jalandhar district, Ajnala in Amritsar district and Gurdaspur and Batala in Gurdaspur district had Muslim-majority and were almost contiguous to West Punjab (Pakistan), yet they were given to India.

The documents now available show that Sir Radcliffe showed the original draft of the proposed award to the Governor-General and Viceroy on August 9, 1947 at a lunch in Mountbatten’s Chief of Staff, Lord Ismay’s house in the Viceroy’s Estate (present-day Rashtrapati Bhawan) and on further consideration, he made the award in terms which departed from the first draft.

Christopher Beaumont, ICS (1936- Punjab), secretary of the Radcliffe Commission, has confirmed that frontiers had been secretly redrawn to favour India. He confirmed this in a newspaper article in The Daily Telegraph, London, on February 24, 1992.

British Prime Minister Clement Attlee had asked the Secretary of State for Commonwealth, Philip Noel-Baker, to look into allegations by Sir Zafrullah Khan, Foreign Minister of Pakistan, who had denounced the alterations in the Radcliffe Award in the Security Council, under pressure from Congress leaders through Lord Mountbatten.

In the report to Attlee, it was stated that Radcliffe admitted that he had shown the award to the authorities in Delhi (Lord Ismay and Lord Mountbatten) and thereafter it was changed. The revelations by Christopher Beaumont conclusively prove the same.

Radcliffe left India on August 14, 1947, never to return to the land he divided. It is said that he had been forewarned by an astrologer that he would be brutally killed if he ever visited India again. He died on April 1, 1977, in London.

The credit for saving the precious Indian territory goes to Indian leaders whose close propinquity with Lord Mountbatten and animated sagacity made India’s genuine claims plausible to him. Cogent alterations were got done in the award in time, which a beholden nation and generations of Indians would always remember with gratitude.

Seldom any ‘award’ in history has had such a walloping, nay humongous and searing, effect on humanity as the Radcliffe Award because it led to the migration of over 13 million people, savage death to a million innocent, overnight forcible change of religion of about two lakh and kidnapping of about 80,000 women, out of whom 54,000 never returned to their countries. Millions in South Asia still remember the Radcliffe Award, the sufferings it brought for them and their families and the toggling effect it had on future generations of India, Pakistan and Bangladesh.