There is a short cut to success

You don’t need a three-hour long runtime to conjure up memorable characters. What you need is a ‘short’ film with a ‘lasting’ content. With the popularity of short films steadily on the rise, and the turning of prominent actors such as Gangs of Wasseypur fame Manoj Bajpayee and Taare Zameen Par actress Tisca Chopra towards the genre, not so long ago, it is rather safe to draw the two conclusions. 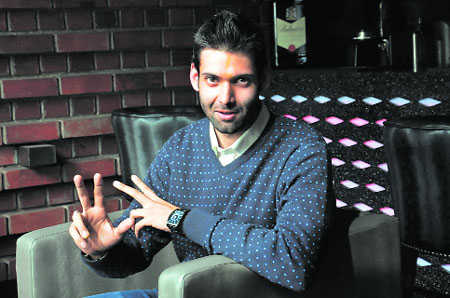 You don’t need a three-hour long runtime to conjure up memorable characters. What you need is a ‘short’ film with a ‘lasting’ content. With the popularity of short films steadily on the rise, and the turning of prominent actors such as Gangs of Wasseypur fame Manoj Bajpayee and Taare Zameen Par actress Tisca Chopra towards the genre, not so long ago, it is rather safe to draw the two conclusions.

Short-filmmaker and Chandigarh lad Ojaswee Sharma, who was recently conferred with the Best Short Film Award at the Punjabi Cinema Golden Honours 2016, in appreciation of his short film—Bodybuilding the Indian Way; highlights the probable reasons behind the paradigm shift, “Tisca Chopra’s short film Chutney became instantaneously viral. So, did Neeraj Pandey’s short film Ouch starring Manoj Bajpayee. The two things go out to show that the power of short films and that of digital platforms in granting them recognition is finally being acknowledged.”

Short duration, smaller budgets and great reach—these are some of the things that make the genre of short films appear all the more endearing to Sharma, who has created six short films till date.

“Short film is a genre in itself. Since there is a limited time frame at hand, it pushes you to give it your best. Besides, it is perhaps the only medium which affords viewers the luxury of treating themselves to an array of subjects in such less time!” shares Sharma. But that is not the only genre he has dabbled in. “I released a web series— Kanwal Diaries. The recent episode takes a cheesy take on celebratory gun firing,” informs the Chitkara University alumnus.

Hailing the internet as a boon for a host of independent filmmakers like him, Sharma warns prospective short filmmakers of the probable chances of misusing the freedom of expression that the genre affords. “Thanks to the digital platforms, today it is easy to upload some content online. But one should remember that the content is supreme.” When it comes to content, one cannot help but touch upon the reigning popularity of biopics in cinema, which translates to content inspired from true incidents in short films. “Yes, biopics are a raging hit these days. ” So, does he plan to make a short film reflecting true incidents? “Indeed. Four of my short films will be out in the first quarter of the year. One of them traces the plight of the family of a drug addict. Also, most of them have been culled from the roots of Punjab and are replete with flavours of the North.”

Flipside of the coin

The growing recognition of the genre apart, Sharma is not oblivious to the challenges associated with making short films. So, blame it on the springing up of a plethora of ‘pseudo-filmmakers’ or the ‘free’ digital access, “unfortunately, short films as a genre are still not being taken all that seriously, but things are changing!” observes Sharma. So, which mini-movie are you watching today?