ON Monday the ruling Bharatiya Janata Party announced its preference for the next President of India: Governor Ram Nath Kovind of Bihar. 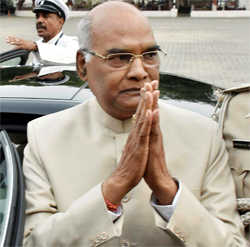 ON Monday the ruling Bharatiya Janata Party announced its preference for the next President of India: Governor Ram Nath Kovind of Bihar. Other than the fact that he belongs to the Dalit community, it is difficult to see how the Patna Raj Bhavan incumbent makes the presidential cut. Admittedly, he is not without experience of public life; he also has certain familiarity with the legislative landscape. The problem is that the selection is seen as a realpolitik pursuit of a ‘Dalit Agenda’. In this age of identity politics and caste vote banks the NDA managers have their calculations and compulsions. The choice has already been framed, by the NDA ministers, in terms of political endorsement or opposition to a Dalit. Clever but crude. Such arguments are hardly likely to produce any kind of consensus on the NDA nominee.

The onus is on the non-BJP political forces to come up with a  better and more formidable candidate than Mr Kovind. That Mr Kovind is a party man need not be a disqualification in itself; but that he has strong and old affiliation to the RSS invites — as it should — reservation and opposition. The Opposition will be entirely within its democratic rights to contest the ruling party’s choice — just as the BJP had insisted, five years ago, on putting up PA Sangma against Pranab Mukherjee, despite the fact that the numbers overwhelmingly favoured the UPA nominee. The NDA has an edge this time and seems to have done its homework in ensuring support from many smaller non-NDA outfits. Still, the Opposition is under no obligation to give a free passage to the ruling party’s man.

Given that the ruling establishment has political momentum and assumption of popular acceptance behind it, its presidential choice is rather disappointing. It could pick an outstanding public figure to head the republic. Tokenism has its uses, and we have already had a Dalit president (KR Narayanan). The person who gets to live in the sprawling Rashtrapati Bhavan has to inspire confidence that he/she can be relied upon to be a robust custodian of the republic and its constitutional values and traditions. On that count, the Kovind choice falls considerably short.