Tourists among 1,000 stranded in snow-covered higher reaches of Manali

SHIMLA: More than 1,000 people, including tourists and locals running camping sites, have been stranded in the higher reaches of Manali and Keylong due to fresh spell of snow. 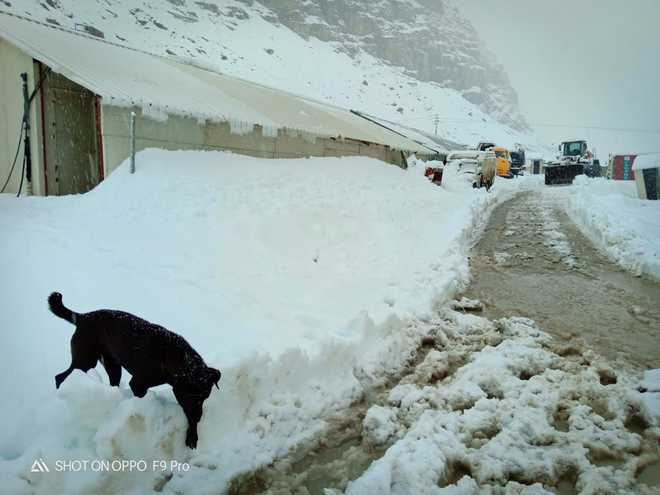 The road blocked on Manali-Leh highway at Gufa hotel in Lahaul, 30 km from Kelong. Tribune photo

More than 1,000 people, including tourists and locals running camping sites, have been stranded in the higher reaches of Manali and Keylong due to fresh spell of snow over the past 24 hours.

The people have been mainly stranded between Serchu and 16,500-ft-high Bara La Cha pass, between Zing Zing Bar and Deepak Tal on the Keylong Serchu-Leh highway and between Grampu and Batal on the Kaza-Grampu Manali road. At places, three feet of snow has been recorded.

Over 50 motorists and jeep safaris that left for Leh three days back from Keylong had reached Serchu camps.

There are more than 500 tourists, including foreigners, who have abandoned their vehicles on the the highway at several places due to snow and have taken shelter in camps and tents at Zing Zing Bar and Serchu, president of Lahaul Spiti hoteliers association Tashi Haryapa told The Tribune.

All roads in Lahaul remained closed and about 100 tourists who came from Kaza in Spiti on Sunday remained stranded at Grampu Batal and Chatru on the Kaza -Grampu road.

The tourists are safe but the camp owners at Serchu and Batal and Grampu and Zing Zingbar may run out of food supply as they were to shut down the camps by this week due to the coming winter season, Tashi said.

More than 300 tourists from West Bengal and other states, including foreigners, remained stranded in Keylong Sissu and Udaipur, due to the snow. They are safe and are staying in local hotels, Tashi said.

The entire Lahaul Valley has plunged into darkness as power has been snapped due to heavy snow.

The tourists could be airlifted by the chopper as the BRO will take days to restore the highways. But it is still snowing and no chopper could operate till the weather cleared, Tashi said.

Apple trees have been destroyed and peas, potatoes and off-season vegetable crops have suffered massive and unprecedented damage, official and local inputs revealed.

“The communication remained cut off due to the blackout in the Valley for the past three days. We are running generators to recharge batteries of mobile phones, but the BSNL connectivity, the only service provided in the Valley, was also snapped due to lack of power.”

There was, however, no official information available on the exact number of people stranded in the snow-bound highways in Lahaul.

The Lahaul Spiti DC could not be contacted due to breached link to the tribal valley.