JAMMU: Commuters are facing a harrowing time on the Jammu-Srinagar national highway and other connecting roads in view of heavy traffic congestion. 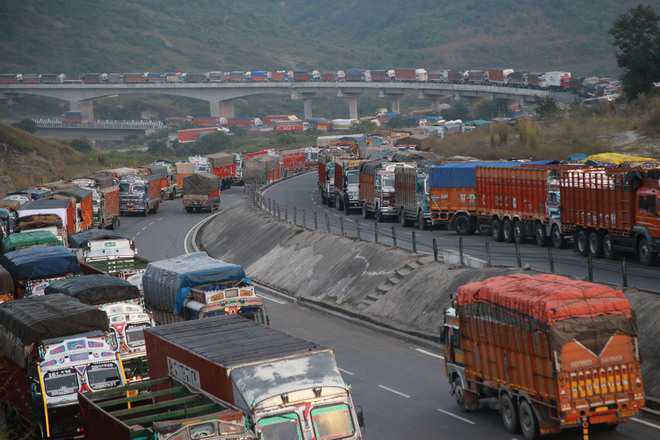 << Trucks stranded on the Jammu-Srinagar highway near Udhampur. Tribune Photo

Commuters are facing a harrowing time on the Jammu-Srinagar national highway and other connecting roads in view of heavy traffic congestion.

Ambulances and vehicles carrying patients in urgent need of emergency care are the worst hit, as they have to remain stuck in traffic jams for hours.

“Doctors at the Doda District Hospital referred my wife to Government Medical College, Jammu, on Wednesday night. We boarded an ambulance and left for Jammu, but at Nashri, there was a huge traffic jam. We reached Jammu at 10 am on Thursday,” said septuagenarian Abdul Rashid Tantray of Ghat village, Doda.

“I have never seen such a long traffic jam on this highway. Travel from Doda to Jammu takes around four hours, but last night it took us 10 hours,” he said.

The highway is a lifeline for the people of the Kashmir valley and four districts of the Jammu region, including Doda, Kishtwar, Ramban and Udhampur. People at the helm of state affairs, despite being aware of the condition, have been turning a blind eye to the issue.

Sajad Lone, former minister and People’s Conference chairman, also witnessed this situation on Wednesday and took to Twitter to narrate his ordeal.

“Travelled on the Jammu-Srinagar highway yesterday. Jammu to Kishtwar. Returned to Batote en route Jammu at 9 pm. Nashri tunnel jammed. Changed plan went to Srinagar instead. Some from my team went to Jammu. At 7 am today they were still at Nashri tunnel,” Lone tweeted.

“This highway has been abandoned by successive governments. We fly by air. The plight of the poor who travel on this highway is cruel. Truckers have hijacked the highway. No discipline. Total disorder, total anarchy,” the tweet added.

Nightmare for The Tribune team

A heavy traffic jam on the Jammu-Srinagar national highway was a nightmarish experience for The Tribune team on Wednesday. To cover the urban local bodies elections in Udhampur and Ramban districts, The Tribune team was caught in a huge traffic jam. A journey of 90 minutes from Udhampur to Ramban took about four hours, a frustrating reminder of what people go through daily. At some places, ambulances carrying patients could be seen stuck between heavy trucks. The Traffic Police was nowhere to be seen to streamline the system.