NEW DELHI:The US has designated 12 persons, including the chief of the banned Tehreek-e-Taliban Pakistan (TTP) Noor Wali Mehsud, as global terrorists and imposed sanctions on multiple “terrorists and their supporters”. 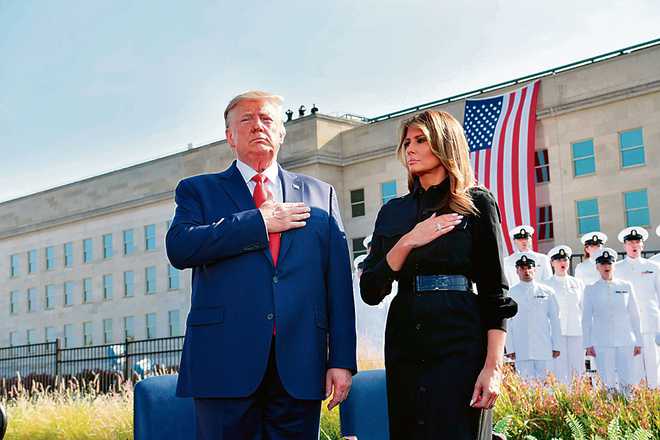 US Prez Donald Trump and Melania Trump during a ceremony to mark the 18th anniversary of the 9/11 attacks, in Washington. AFP

The US has designated 12 persons, including the chief of the banned Tehreek-e-Taliban Pakistan (TTP) Noor Wali Mehsud, as global terrorists and imposed sanctions on multiple “terrorists and their supporters”.

A day before the anniversary of 9/11, US President Donald Trump issued an executive order to expand the administration’s ability to go after suspected terrorists and their financiers and supporters. The US Department of state said: “Along with Mehsud, also designated as Specially Designated Global Terrorist are leaders of previously designated groups, including Hizballah, HAMAS, Palestinian Islamic Jihad, IS, IS-Philippines, IS-West Africa, and Tehrik-e-Taliban Pakistan.” In addition to these actions, the Department of the Treasury has designated 15 terrorists affiliated with IS, IS-Philippines, IS-Khorasan, Al-Qaida, HAMAS, and Iran’s Islamic Revolutionary Guard Corps-Qods Force under the same authority.

The executive order is the most significant update of terrorist designation by the authorities since the aftermath of the 9/11 attacks, and will enable the US to more effectively sanction the leaders of terrorist organisations and those who train to commit acts of terrorism.

By this new order, the US seeks to deny these terrorists the resources to plan and carry out attacks. “All of their property and interests in property subject to the US jurisdiction are blocked, and the US persons are prohibited from engaging in any transactions with them.” — IANS