Why CBI does good job when no political overtone to a case: CJI

NEW DELHI: Amid allegations of misuse of investigating agencies by the government, Chief Justice of India Ranjan Gogoi today wondered why the CBI did a good job when there was no political overtone to a case. 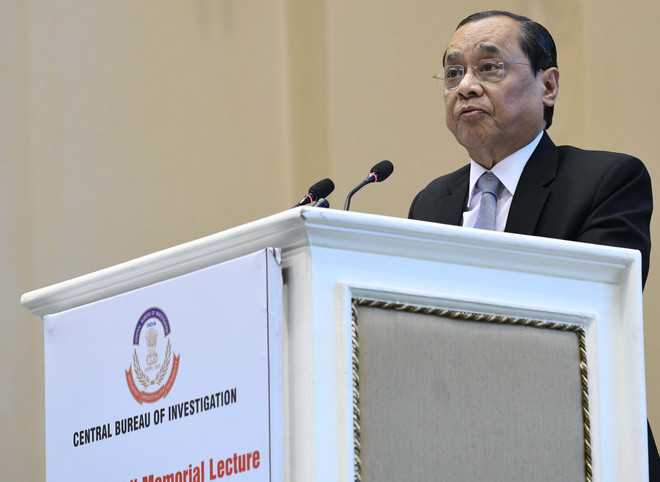 Amid allegations of misuse of investigating agencies by the government, Chief Justice of India Ranjan Gogoi today wondered why the CBI did a good job when there was no political overtone to a case.

Delivering the 18th edition of the DP Kohli memorial lecture, CJI Gogoi praised the premier probe agency as "a multi-faceted, multi-disciplinary investigative agency with a wide range of work" which has for most part of its existence enjoyed tremendous trust among the citizenry.

"Unfortunately, attention is more often than not drawn to failure than success of any public institution. True, in a number of high-profile and politically sensitive cases the agency has not been able to meet the standards of judicial scrutiny.

"Equally true it is that such lapses may not have happened infrequently. Such instances reflect systemic issues and indicate a deep mismatch between institutional aspirations, organisational design, working culture, and governing politics," the CJI said. "Why is it that whenever there are no political overtones to the case, the CBI does a good job?"the CJI wondered.

He said, "Given the intense scrutiny that working of the CBI is being subjected to, public perception of the agency must be of the highest degree. Not long ago, an investigation from CBI was all that was asked for by those seeking to secure justice. Such was the trust people reposed in this institution. Any gap between public perception and the quality of institutional performance, would adversely impact the governance of the nation, which we can ill afford."

The CJI enumerated legal ambiguity, political and administrative interference, weak human resource, lack of adequate investment and accountability as flaws in the functioning of the CBI.