‘America under siege, only I can fix it’ : The Tribune India

‘America under siege, only I can fix it’

CLEVELAND:Donald Trump has painted a picture of a dystopian America — and sold himself as the only one who could fix it. 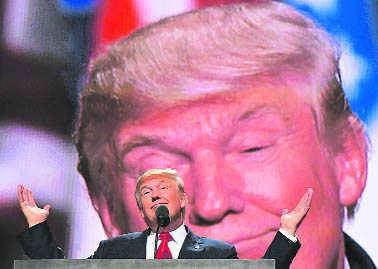 Donald Trump addresses delegates on the last day of the Republican National Convention in Cleveland. AFP

Donald Trump has painted a picture of a dystopian America — and sold himself as the only one who could fix it.

As he accepted the Republican presidential nomination on Thursday night, he vowed to be tough on crime and illegal immigrants.

“I have joined the political arena so that the powerful can no longer beat up people who cannot defend themselves,” Trump said, adding: “Nobody knows the system better than me, which is why I alone can fix it.”

He accused Democratic rival Hillary Clinton of a legacy of “death, destruction, terrorism and weakness” as US secretary of state. His 75-minute speech was designed to set the tone for the general election campaign against Clinton, an answer to Republicans who say the best way he can unify the divided party is to detail why the Democrat should not be elected on November 8.

As the crowd chanted: “Lock her up” for her handling of US foreign policy, Trump waved them off and said: “Let’s defeat her in November.” Thousands of supporters who were gathered in the convention hall roared their approval.

When it was over, Trump was joined on stage by his family.

Will build a ‘great border wall’

Trump presented a bleak view of America under siege from illegal immigrants, threatened by Islamic State militants, hindered by crumbling infrastructure and weakened by unfair trade deals and race-related violence.

Accusing illegal immigrants of taking jobs from American citizens and committing crimes, Trump vowed to build a “great border wall” against the border-crossers. “We will stop it,” he said. Trump took positions in conflict with traditional Republican policies. He said he would avoid multinational trade deals but instead pursue agreements with individual countries. He would renegotiate the NAFTA trade accord linking the US, Canada and Mexico. He would penalise companies that outsource jobs and then export their foreign-made products back into the US.

Trump portrayed himself as a fresh alternative to traditional politicians, willing to consider new approaches to vexing problems and help working-class people who may feel abandoned.

Laying out his case against Clinton, he denounced nation-building policies that were actually put in place by George W. Bush. Trump said policies pursued by Clinton in Iraq, Libya, Egypt and Syria had made a bad situation worse.

‘Things have to change’

Trump accused Clinton of being the puppet of big business, elite media and major donors who want to preserve the current political system.