TAIPEI: A Taiwanese hiker, known for posting her bikini selfies from summits conquered, has died after falling into a 65-foot-deep ravine during a solo trek in Central Taiwan’s Yushan Mountain. 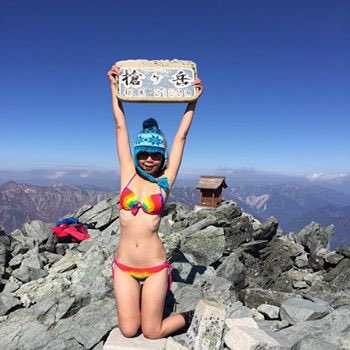 Due to the impact of the fall, Wu sustained injuries to her leg and was unable to move, the report added. Photo Credit: Twitter

A Taiwanese hiker, known for posting her bikini selfies from summits conquered, has died after falling into a 65-foot-deep ravine during a solo trek.

Gigi Wu tragically froze to her death following the fall, as the 36-year-old could not be saved by emergency services due to foul weather, People magazine reported.

She was embarking on a 25-day solo hike when she stumbled down the deep ravine in Central Taiwan’s Yushan Mountain, Taiwan News reported.

Due to the impact of the fall, Wu sustained injuries to her leg and was unable to move, the report added.

Despite her many calls for help, emergency responders were not able to immediately reach her as weather conditions were extremely dangerous.

Nearly 28 hours later, Wu was airlifted out but was pronounced dead, officials told the media.

The popular social media figure is thought to have died of hypothermia, the BBC reported.

She was extremely popular and messages on her Facebook pages paid rich tributes to her for being an inspiration.

Wu was alone on the multi-day tour of the mountain range in the Yushan National Park. She has been posting pictures of herself in bikinis from summits, was an experienced hiker and appeared to have been using proper equipment and precautions during her expeditions.

According to Taiwan News, bad weather had prevented a rescue helicopter from reaching her three times. The final rescue mission was eventually sent out on foot.

Her body was found on Monday after temperatures had been around freezing point during the previous night, the Liberty Times cited rescue operators as saying.

In a 2018 interview cited in Focus Taiwan, she explained she first got the idea of posting bikini photos after losing a bet with a friend.

Her last Facebook post to her more than 18,000 followers is dated January 18, and shows the view from a mountain above the clouds.

More than 1,000 people have since commented. Many posts were following the dramatic rescue operation, when it was not clear whether she was still alive.

Later comments express their condolences, applauding her for having been an inspiration to the hiking community. IANS