Balochs to protest outside UN during Sharif''s address : The Tribune India

Balochs to protest outside UN during Sharif''s address

NEW YORK: Baloch activists will hold protests outside the UN General Assembly headquarters here on Wednesday during PM Nawaz Sharif''s address to the General Debate, to highlight "atrocities" by Pakistani forces in Balochistan. 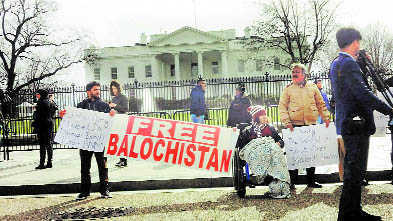 Baloch activists will hold protests outside the UN General Assembly headquarters here on Wednesday during Prime Minister Nawaz Sharif's address to the General Debate, to highlight "atrocities" and human rights violations by Pakistani forces in Balochistan.

The 'Coalition of American Friends of Balochistan' and Indian-American Organisations said they will hold a "peaceful protest" against Pakistan for "its state sponsored atrocities and terrorism on the people of Balochistan, Pakistan Occupied Kashmir, Jammu and Kashmir and minorities".

The Baloch National Movement of North America (BNM) said a joint protest of Baloch and Sindhi activists will be held outside the UN headquarters to protest the "ongoing military operations" in Sindh and Balochistan.

"Baloch people have welcomed and are grateful for the support extended by Indian Prime Minister Narendra Modi at such a critical juncture when our nation is struggling to be free from the illegal military occupation of Pakistan since 1948," BNM said in a statement.

Sharif will address the General Debate tomorrow and has said he will raise the Kashmir issue at the UN.

The group said that since 2003, more than 20,000 Baloch political activists have gone missing, "illegally abducted" by the Pakistani state security forces and victims of enforced disappearances are being "tortured and executed" in custody.

The group also blamed China for joining hands with Pakistan and causing displacement of people living in the tribal and coastal areas with its economic activity.

"China is Pakistan's strategic partner in the economic plundering and mass murder of Baloch civilians, particularly in the coastal belt of the Makran region of Balochistan," it said.

Strongly criticising the China-Pakistan economic corridor, the group said thousands of Baloch tribal people have been dislocated due to the development of the corridor. —PTI