SANTIAGO: A global team of experts has said that Chilean poet and diplomat Pablo Neruda’s death was not due to cancer. He had died in September 1973. 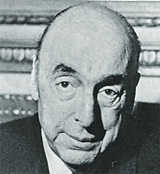 A global team of experts has said that Chilean poet and diplomat Pablo Neruda’s death was not due to cancer.

Neruda was suffering from prostate cancer at the time and cachexia--cancer wasting syndrome--was listed as the official cause of his death on September 23, 1973, reports Efe news.

“Cachexia is ruled out. That is clear,” Judge Mario Carroza, who is overseeing the investigation of Neruda’s death, said on Friday after meeting the team here.

The team, which includes recognised authorities from Chile, Spain, the US, Denmark, Canada and France, has not determined exactly what killed Neruda.

The provisional findings point to a previously undetected toxin, “which in turn requires other studies that will allow us to have a definitive conclusion”, Carroza said.

It is “explicitly certain” that the information on the death certificate “does not reflect reality”, one member of the team, Spanish forensic pathologist Aurelio Luna, told reporters.

Further tests to determine how Neruda died would take about a year, Luna said.

The current investigation goes back to 2011, which the Chilean Communist Party filed a criminal complaint based on charges by former chauffeur Manuel Araya that Neruda was murdered on Pinochet’s orders.

The poet’s body was exhumed on April 8, 2013, and a previous group of Chilean and international experts concluded seven months later that Neruda had not been poisoned.

Carroza, however, was not fully satisfied and he ordered additional tests.

The 1982 death of former President Eduardo Frei Montalva, who governed from 1964-1970, at the Santa Marta Clinic after undergoing a routine procedure has been attributed to poisoning.

“Pablo Neruda died in the same clinic, on the same floor, with the same doctors and several of the same nurses,” Contreras said.

The 1971 Nobel Prize winner died as he was preparing to travel to Mexico on a mission to organise opposition to Pinochet, the attorney said. IANS