Congressman introduces resolution seeking probe into activities of US NGO’s links with LeT : The Tribune India

WASHINGTON: A US lawmaker has introduced a legislation in the Congress seeking a probe into an American non-profit body’s activities in Pakistan and Kashmir, including its reported collaboration with components of Lashkar-e-Toiba. 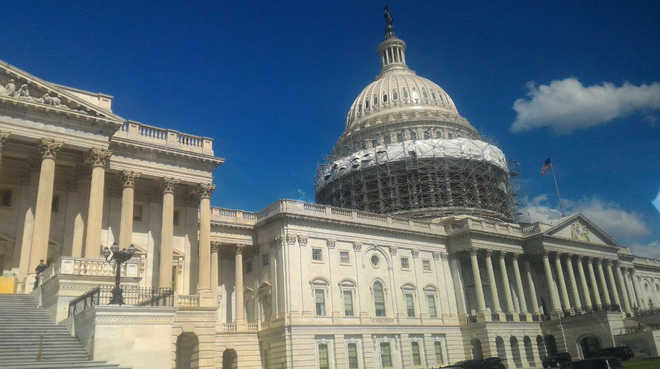 The resolution has been moved to House Foreign Relations Committee for necessary action. File photo

A US lawmaker has introduced a legislation in the Congress seeking a probe into an American non-profit body’s activities in Pakistan and Kashmir, including its reported collaboration with components of Lashkar-e-Toiba, the outlawed outfit which carried out the 2008 Mumbai terror attack.

Introduced by Republican Congressman Jim Banks from Indiana, the House Resolution (No 160) expresses concern over the threat posed to democracy and human rights by theocratic groups operating in South Asia, particularly in Pakistan and Bangladesh.

The resolution has been moved to House Foreign Relations Committee for necessary action. Introduced on Thursday, it does not have any other co-sponsors so far.

Among other calls on “law enforcement to investigate the activities of Helping Hand for Relief and Development in Pakistan and Kashmir, including reported collaboration with components of the Pakistani terrorist network Lashkar-e-Toiba (LeT)”.

Some 166 people, including Americans, were killed in the Mumbai terror attack in November 2008 carried out by 10 LeT terrorists. Nine of the attackers were killed by police while the lone survivor Ajmal Kasab was captured and hanged after handed down death sentence by an Indian court.

Helping Hand for Relief and Development, a registered charitable organisation in the US, openly partnered in 2017 with Pakistan’s Falah-e-Insaniat Foundation, which the US government designated as a terrorist organisation in 2016, it alleged.

The resolution also calls on the United States Agency for International Development, the Department of State, the Department of Homeland Security and other relevant agencies to halt all partnerships and funding arrangements with groups affiliated with Jamaat-e-Islami and its domestic affiliates, including the Islamic Circle of North America, ICNA Relief, Helping Hand for Relief and Development and the Muslim Ummah of North America.

Jamaat-e-Islami is active in both Pakistan and Bangladesh.

Stating that Jamaat-e-Islami applauded the assassination of Punjab Governor Salmaan Taseer for defending the rights of Asia Bibi, a Christian woman accused of blasphemy in Pakistan; the resolution alleges that it led funeral prayers for the terrorist who assassinated Taseer, during which its members prayed for the strength and power to enforce Shariah throughout the world.

The resolution alleges that Jamaat-e-Islami members have been linked with al-Qaeda and the Taliban.

It calls on Bangladesh and Pakistan to deny, disrupt and dismantle the ability of Jamaat-e-Islami and its affiliates which continue posing an immediate and ongoing threat to religious freedom and regional stability. PTI