PARIS/MADRID: Hundreds of firefighters battled on Saturday to contain wildfires in southern France as a stifling heat wave brought record-breaking temperatures to parts of Europe, killing at least three people in Italy. 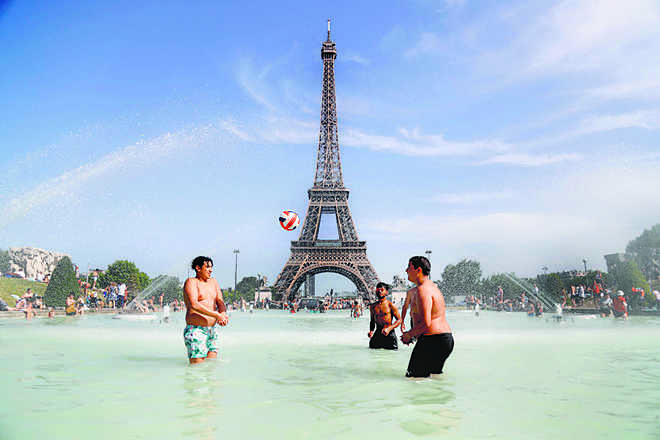 People play as they bathe in the Trocadero Fountain in front of the Eiffel Tower in Paris on Saturday.

Hundreds of firefighters battled on Saturday to contain wildfires in southern France as a stifling heat wave brought record-breaking temperatures to parts of Europe, killing at least three people in Italy.

In the Gard region, where France’s highest temperature on record was registered on Friday at 45.9 degrees Celsius, scores of fires burned some 600 hectares  of land and destroyed several houses and vehicles.

Further north, Paris was due to experience its hottest day of the heat wave so far with a predicted high of 37 degrees. Authorities in the capital maintained a ban on driving older cars to curb heat wave-related pollution.

The World Meteorological Organisation said 2019 was on track to be among the world’s hottest years, and 2015-2019 would then be the hottest five-year period on record. It said the European heat wave was “absolutely consistent” with extremes linked to the impact of greenhouse gas emissions.

In Britain, temperatures were expected to reach up to 35 degrees. For a fourth consecutive day, unusually high temperatures above 43 degrees were forecast across Spain. Forty of Spain’s 50 regions have been placed under weather alert, with seven of them considered to be at extreme risk.  — Reuters