VERSAILLES:France’s President Emmanuel Macron and Russian counterpart Vladimir Putin today held their first meeting since the French leader came to office, with differences on Ukraine and Syria in full view. 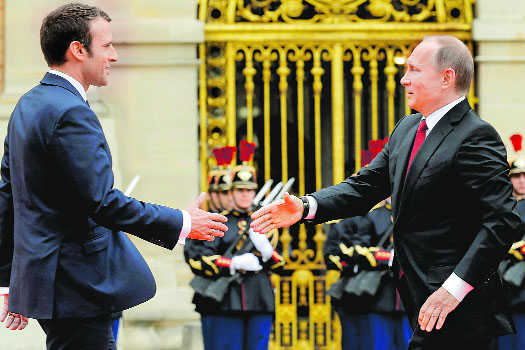 France’s President Emmanuel Macron and Russian counterpart Vladimir Putin today held their first meeting since the French leader came to office, with differences on Ukraine and Syria in full view.

Macron welcomed Putin to the splendour of the Versailles palace outside Paris with a perfunctory handshake—after the 39-year-old made a point of outlasting US President Donald Trump when they clasped hands at the NATO summit last week.

Putin’s visit is the latest test of Macron’s diplomatic mettle after the G7 talks in Sicily last week and the NATO summit in Brussels where he turned the tables on Trump by refusing to release his hand for several seconds during the handshake for the cameras. “It is essential to talk to Russia because there are many international issues that will not be resolved without a tough exchange with the Russians,” Macron said in Sicily. Russia’s ambassador to France, Alexander Orlov, said he hoped the meeting could help turn the page on the fraught relationship between Putin and Macron’s predecessor Francois Hollande. — AFP