SYDNEY/KUALA LUMPUR: Two pieces of plane debris found in Mozambique are "almost certainly" from MH370, Australia and Malaysia announced on Thursday, reigniting hopes of solving the world''s biggest aviation mystery more than two years after the jet disappeared over the Indian Ocean. 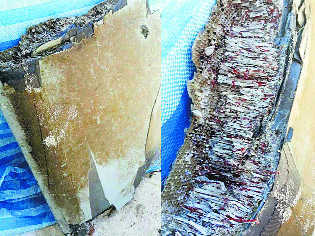 Pieces believed to be from the flight MH370.

Two pieces of plane debris found in Mozambique are "almost certainly" from MH370, Australia and Malaysia announced on Thursday, reigniting hopes of solving the world's biggest aviation mystery more than two years after the jet disappeared over the Indian Ocean.

"The analysis has concluded the debris is almost certainly from MH370," Australia's Transport Minister Darren Chester said of the two pieces of debris that comprise a flat grey fragment with the words "No Step" printed along one side.

Malaysian investigators had found the pieces were consistent with panels from a Malaysia Airlines Boeing 777 aircraft, he said.

"That such debris has been found on the east coast of Africa is consistent with drift modelling performed by (national science body) CSIRO and further affirms our search efforts in the southern Indian Ocean," Chester said.

Until the latest findings, only a wing part recovered from a beach on the Indian Ocean island of Reunion had been confirmed as coming from the jet that disappeared over the Indian Ocean with 239 people, including five Indians, on board.

After months of searches and questions, a South African teenager and an American lawyer recently found debris on separate occasions off the coast of Mozambique, renewing hopes of solving the major aviation mystery.

"I would like to acknowledge the work undertaken by the Australian Transport Safety Bureau, Geoscience Australia, Boeing and Australian National University which assisted the Malaysian Investigation Team with their examination of the debris," Chester said, adding that "the search for MH370 continues".

There are 25,000 square kilometres of the underwater search area still to be searched.

"We are focused on completing this task and remain hopeful the aircraft will be found," Chester said.

The pieces reached Canberra on Sunday to be analysed for their link with MH370 that disappeared on March 8, 2014, after it took off from Kuala Lumpur, Malaysia, en route to Beijing.

Malaysia's Transport Minister Liow Tiong Lai said investigators had advised that the "dimensions, materials and construction" of both parts conformed to Boeing 777 specifications, while the "paint and stencilling on both parts match those used by Malaysia Airlines (MAS)".

"As such, both parts are consistent with panels from a MAS Boeing 777 aircraft, and almost certainly are from MH370," he said in a statement.

Meanwhile, officials are arranging to collect and examine a fourth piece of debris, found at Mossel Bay in South Africa's southern coast on Monday by a local archaeologist.

It apparently bears a part of the logo of Rolls Royce, the British company which manufactures engines for aircraft including the Boeing 777.

Australia is leading the underwater search effort to find the plane in the southern Indian Ocean. PTI