ISLAMABAD: The father of Pakistan''s nuclear programme Abdul Qadeer Khan has said the country has the ability to target Indian capital Delhi from Kahuta near Rawalpindi in five minutes. 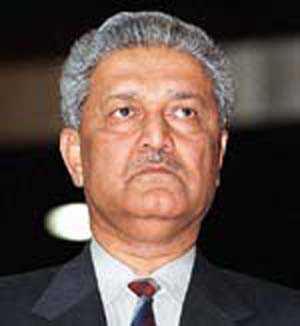 The father of Pakistan's nuclear programme Abdul Qadeer Khan has said the country has the ability to target Indian capital Delhi from Kahuta near Rawalpindi in five minutes.

“Pakistan could have become a nuclear power as early as 1984 but the then President General Zia ul Haq opposed the move,” Khan said while addressing a gathering on Saturday to mark the anniversary of first nuclear tests, which were carried out under his supervision in 1998.

"We were able and we had a plan to launch nuclear test in 1984. But President General Zia ul Haq had opposed the move," said Khan.

He said General Zia, who ruled Pakistan from 1979 to 1988, opposed the nuclear testing as he believed that the world would intervene militarily.

Khan was disgraced in 2004 when he was forced to accept responsibility for proliferation and live a life of semi house arrest.

He regretted the treatment and said Pakistan would never have achieved the feat of becoming first Muslim nuclear country without his "services".

"We are facing the worst against our services to the country's nuclear program," he said referring to the humiliation he suffered. — PTI