ISLAMABAD: The Pakistan government claimed that its defence budget was kept unchanged at Rs 1,152,535 million for next fiscal (2019-20), but the official documents showed that there was nominal increase of 4.5 per cent in the defence expenditure as compared to the last year. 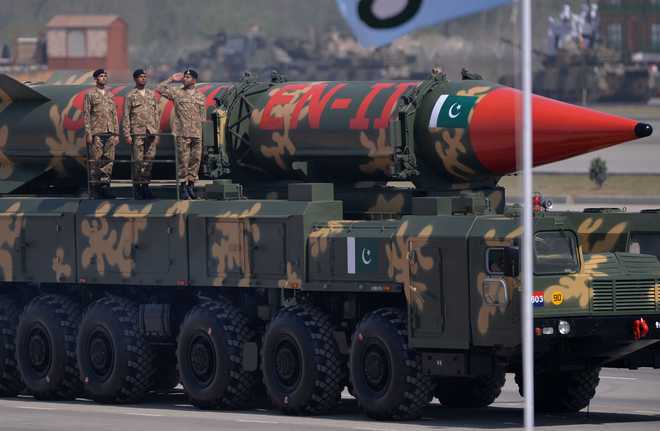 The Pakistan government claimed that its defence budget was kept unchanged at Rs 1,152,535 million for next fiscal (2019-20), but the official documents showed that there was nominal increase of 4.5 per cent in the defence expenditure as compared to the last year.

So the actual rise from previous allocation was Rs 52,201 million, which is 4.5 per cent.

But Minister of State for Revenue Hammad Azhar in his 2019-20 budget speech on Tuesday did not provide intricate details and just said that the defence budget would remain unchanged at Rs 1.15 trillion.

Prime Minister Imran Khan also said the military had “voluntarily agreed” to cut its expenditures due to “critical financial situation”.

These figures do not include Rs 327 billion set aside or pensions of retired defence personnel. Originally pension of retired soldiers was part of defence allocation but it was transferred to civil heads during regime of military ruler Pervez Musharraf.

Dawn reported that freeze on defence budget would affect the ‘civil works’ head the most as it has received a 12.77 per cent cut. The civil works head accounts for the funds marked for maintenance of existing infrastructure and construction of new buildings.

The other head to get relatively lesser increase is that of operating expenses, which would grow by 4.4 per cent. Operating expenses cover transport, POL, ration, medical treatment, training, etc.

Meanwhile, employee-related expenses, which include salaries and allowances paid to troops in uniform and civilian employees, are proposed to go up by 6.5 per cent.

In line with the announcement by the civilian and military leadership that defence capacity would not be affected, the expenditure on ‘physical assets’ is set to increase by 11.7 per cent. This head provides for local purchase and import of arms and ammunition and related procurements.

Last year when the defence budget was hiked by massive 18 per cent, the physical assets head had received a 16 per cent raise.

The army traditionally had the lion’s share in defence budget. This year the allocation for the army would remain static at Rs 523 billion. It still accounts for 45.4 pc of the total defence allocation.

The budget of the Pakistan Air Force (PAF) would increase by 9.64 per cent. Over 22 per cent of the defence allocation would go to the air force.

The Navy’s share would expand by 9.6 per cent. Its share in the defence pie is 11.3 per cent. The defence establishment/inter-services institutions are getting 8.78 per cent hike in their budget. They account for 21 per cent of the remaining defence allocation.

The pink book, which carries the details of budgetary demands, further revealed that initially the government had planned to allocate Rs 1.2 trillion for defence. However, the figure was at the eleventh hour revised downward to Rs 1.15 trillion.

The figure of Rs 1.2 trillion has remained in the book and an addendum had to be added to reflect the changed allocation along with its breakdown.

In the original scheme of things, the army’s share was static, whereas that of the PAF was to increase by 18.31 per cent, Navy by 19.95 per cent and defence establishment/inter-services by 18.48 per cent.

Apparently, the PAF, Navy, and defence establishment/inter-services at the last stage agreed to slash their raise and accept on average a 9 per cent hike. — PTI