Russians up strikes in French fury

PARIS/MOSCOW: France and Russia staged air strikes on Islamic State targets in northern Syria on Tuesday, punishing the group for attacks in Paris and against a Russian airliner that together killed 353 people. 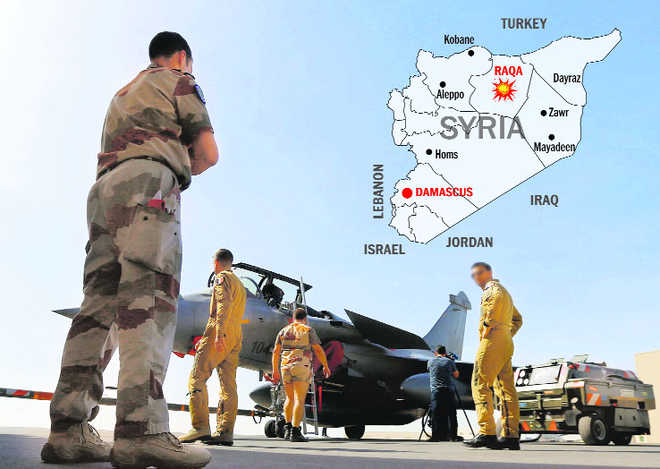 French soldiers prepare a Rafale fighter at an undisclosed military base at in the Gulf. AFP

France and Russia staged air strikes on Islamic State targets in northern Syria on Tuesday, punishing the group for attacks in Paris and against a Russian airliner that together killed 353 people.

Islamic State had claimed responsibility for a coordinated onslaught in Paris on Friday and the downing of a Russian charter jet over Sinai on October 31, saying they were in retaliation for French and Russian air raids in Iraq and Syria.

Still reeling from the Paris carnage that killed 129, most of them young people, France formally requested European Union assistance in its fight against the militants and British PM David Cameron edged closer to extending military action against Islamic State in Syria. Police investigating the worst atrocity in France since World War-II discovered two safe houses in Paris where they believe the militants launched their assault. Underlining the widening scope of the probe, the police in Germany said they arrested five suspects, including two women.

In Moscow, the Kremlin acknowledged that a homemade bomb had destroyed a Russian airliner last month, killing 224 people. President Vladimir Putin vowed to hunt down those responsible and intensify air strikes against Islamists in Syria.

“Our air force's military work in Syria must not simply be continued,” he said. “It must be intensified in such a way that the criminals understand that retribution is inevitable.” Western officials said Russia launched a “significant number” of strikes hitting the Islamic State stronghold of Raqa. In a separate action, apparently not coordinated, French warplanes targeted Raqa for a second day. French President Francois Hollande has said he will see Putin and US President Barack Obama to convince them to join a grand coalition against Islamic State. — Reuters

"We will find them anywhere on the planet and punish them. Our air force's military work in Syria must not simply be continued. It must be intensified in such a way that the criminals understand that retribution is inevitable." —Vladimir Putin, Russian President