We are wise enough to resolve border dispute with India: China to US

BEIJING: Asking the US to respect the efforts by China and India to resolve their boundary dispute peacefully, a top Chinese official on Monday said the two nations are wise enough to deal with it after the Pentagon accused Beijing of deploying more troops along the Sino-India borders. 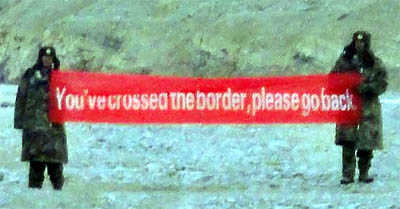 Asking the US to respect the efforts by China and India to resolve their boundary dispute peacefully, a top Chinese official on Monday said the two nations are wise enough to deal with it after the Pentagon accused Beijing of deploying more troops along the Sino-India borders.

“The Chinese side is committed to safeguarding peace and tranquility of the border areas between China and India and resolving the boundary question through negotiation with India,” the Chinese Foreign Ministry said in a written response to PTI here about a Pentagon report alleging that Beijing has increased defence capabilities and deployed more troops along the borders with India.

The US military report also warned of increasing Chinese military presence in various parts of the  world, particularly in Pakistan.

“China and India are wise and capable enough to deal with this issue. It is hoped that other country would respect efforts made by China and India for the peaceful settlement of dispute, rather than the opposite,” the Foreign Ministry said, apparently referring to the US.

US Deputy Assistant Secretary of Defence for East Asia Abraham M Denmark had said that “we have noticed an increase in capability and force posture by the Chinese military in areas close to the border with India.” “It is difficult to conclude on the real intention behind this,” Denmark said on Saturday after submitting Pentagon’s annual 2016 report to the US Congress on ‘Military and Security Developments Involving the People’s Republic of China’.

Yesterday, the Chinese Defence Ministry expressed “strong dissatisfaction” and “firm opposition” to the Pentagon report which also alleged that China is focusing on the militarisation of the artificial islands built by it in the disputed waters of the South China Sea in a bid to assert its control.

Skirting any references to allegations of increasing troops presence along the Sino-India border, the Defence Ministry accused the Pentagon’s annual report as misrepresentation of China’s military development.

The US, which has accused the Chinese military of lacking in transparency, deliberately distorted China’s defence policies and unfairly depicted China’s activities in the East China Sea and South China Sea, a statement issued by Chinese Defence Spokesman Col Yang Yujun said.

“China follows a national defence policy that is defensive in nature. Moves such as deepening military reforms and the military buildup are aimed at maintaining sovereignty, security and territorial integrity, and guaranteeing China’s peaceful development,” Yang said, adding that the US side has always been suspicious.

The South China Sea has become a major flash point for military tensions between China and the US in recent years as Beijing which claims sovereignty over all most all of the South China sea sought to assert its claim by building artificial islands with military facilities.

Backing the small states, the US has so far sent three warships through the waters around the artificial islands to asset the right for freedom navigation.

In his statement, Yang said it is the United States which has been flexing military muscles by frequently sending military aircraft and warships to the region. — PTI