A Swiss photographer and Gandhiji 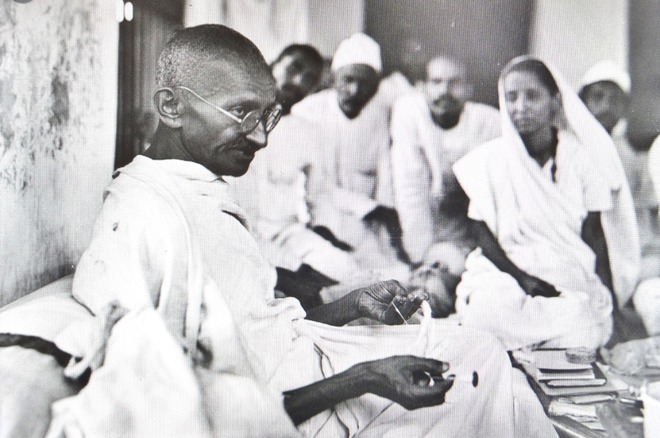 “I would like to take some pictures of you,” I told Gandhi.

“Then you will have to see about taking them”, he said in reply. “I have sworn never to ‘pose’ for a photographer! Try your luck, perhaps it might even turn out well.”

First, people (in Europe) read about Gandhi the powerful political figure, the ‘man who has challenged the British Empire’; then, in Bosshard’s photographs, they came face to face with an ordinary and unassuming person who had very everyday wants and, with a philosophical dignity, focused entirely on the essentials. But the gentle light that filters into the enclosed space (around him) and breaks up the soft, white folds of Gandhi’s plain cotton robe gives his simple actions a spiritual, even meditative dimension. — Peter Pfrunder

Indiennes: that is how printed and painted cotton fabrics from India were called when they arrived in Europe. That used to be in the 17th century. But it is under this very name that a fine exhibition was held in Zurich, not more than six months back, at the prestigious Swiss National Museum — their Landesmuseum, although it featured more than those splendid textiles alone. The intention of the show was to explore things that centred around textiles: the colonial heritage, the history of cotton in India, the trade routes between India and Europe, especially Switzerland, brief histories of companies that traded in cotton, and set up a major footprint in India, among other themes. What specially caught my eye, however, was a section that featured the work of the distinguished Swiss photographer, Walter Bosshard, who was assigned to go to India and document, if possible, personal aspects of the one man who had made hand-spun, hand-woven, cotton fabric called khadi, a symbol of India’s virtual resurgence: Gandhiji. ‘The man who challenged the British Empire’, is how that great man — Mahatma, literally — had started being referred to in Europe, and everyone was agog. The year was 1930: the Dandi March was not far.

Walter Bosshard, the photographer who we speak of, had no special interest in India, or in Gandhiji. He was a teacher and an art historian in a small farming village on Lake Zurich, but, seeing the rapid happenings all around him, especially in the wake of World War I, he decided to move into the fertile area of photo-journalism. It is in this position that he was picked by a Munich-based periodical — the Muenchener Illustriete Presse — (which till then had no special interest in India), and asked to proceed to India. His assignment? To travel the length and breadth of India and report on the independence movement there. On the 21st of February, he arrived at Mumbai, armed by his camera and his hunger for meaningful ‘news’. Later, he wrote of his stay in India in a memoir — a book which he titled ‘Indien kaempft’ — in which he recorded  that he covered more than twenty thousand kilometres in India, visited close to ten thousand towns and villages, and spoke to some five thousand persons. All this was to understand and document the mood of India at that time, but the great highlight of his stay of course was when he came face to face with Gandhiji: the man himself.

Peter Pfrunder has written with feeling on what happened when Bosshard met Gandhiji. This was the day before the actual event — the defiance of the ignominious Salt Act by picking up a lump of salt from the sea — that Gandhiji had been planning together with a large number of devoted and fired-up followers. A whole nation, as it turned out, was to get galvanised by that symbolic gesture and the following violence which was unleashed by the colonial masters. But Bosshard found Gandhiji utterly serene, sitting surrounded by his associates at his spinning wheel working his way through a big pile of unspun cotton. The photographs that Bosshard took of Gandhiji during his meetings have a wonderful, heartwarming texture: most simply dressed in white khadi; leaning against a bolster; reading a broadsheet newspaper; smiling his nearly toothless smile; slurping soup from a cup held in both hands; holding a skein of cotton in his hands while talking to his associates (‘he (…) eagerly twisted the white cotton thread as if for him there was nothing else in the world but spinning yarn’). Is this the man, Bosshard must have thought initially, who is going to lead a nation that shall shake the pillars of the British Empire? But he could see the steely resolve in Gandhiji’s eyes too, and that transparency of thought and action which were stirring in themselves. The photographer, as Pfrunder notes, ‘had a whole morning to observe the Mahatma without interruption, asking him questions from time to time, but then stepping back into the shadows and letting the special mood of the moment take over.’ Having registered the fact that Gandhiji was not going to pose for him, he worked so unobtrusively that ‘as time went by, Gandhi hardly noticed him anymore. And after he had photographed the Mahatma eating, laughing, reading, discussing, lecturing, spinning and shaving, he ventured even further: ‘May I also take a photo of Gandhi sleeping?’ I asked the young man standing at the door. ‘If you do it quietly, you can try. But don’t wake him, because he needs his rest.’

Bosshard captured the dramatic happenings of the ‘Dandi’ day in his own style: hordes of people, some spreading over the bed of the sea, others gathered at its edges; a young boy turning around to look at his friends after having picked up a lump of salt, and holding it up in his hand. Among the photographs that were published in the Munich periodical — the most striking one was on the front page, showing Gandhiji reading his newspaper, utterly unmindful of his surroundings — were those of common men and women. There is about them a warmth, and an honesty, that I find compelling. Who would not see the ‘face of India’ of those times in the portrait he took of a young man, possibly a Sidi from tribal Gujarat, dressed in a kurta of the coarsest khadi, cap on head, gazing straight at the camera, on his face a questioning expression of uncertainty mixed with faith. On his shirt are stitched two small rough patches of cloth: one an image of two crossing Congress tricolour flags, and on the other, below it, on the chest, the words in different lines, in English: “Boycott British Goods and Foreign Cloth”. The young man might have been eighteen or nineteen years of age.