Alexander the Great, and his legends : The Tribune India

Alexander the Great, and his legends 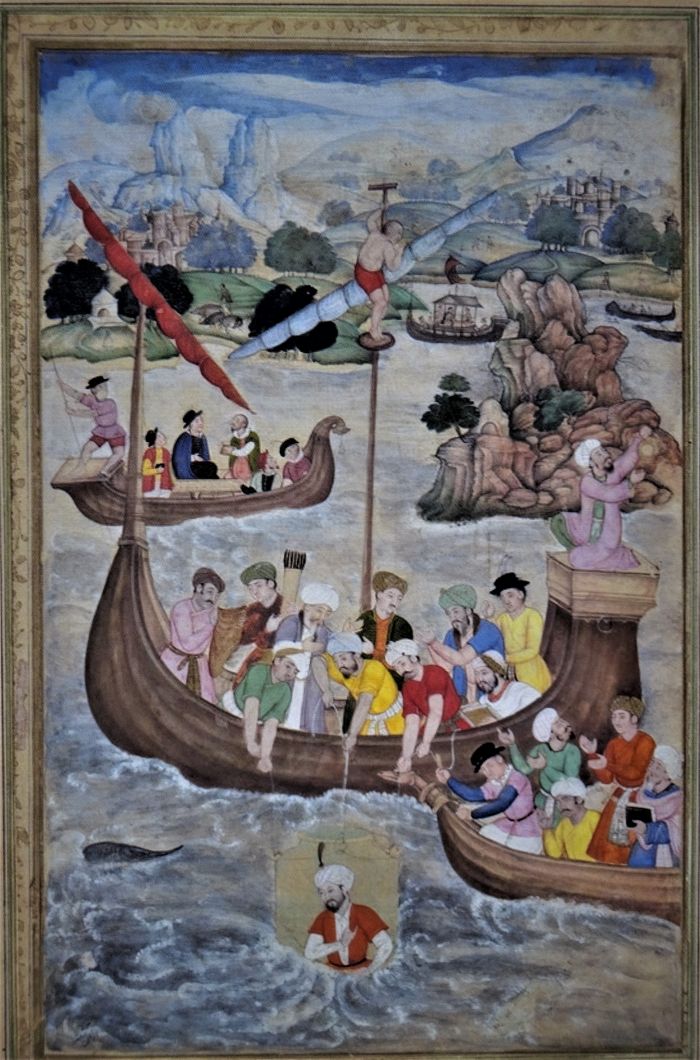 Alexander being lowered into the sea, Mughal, ca 1597. By Mukund. Metropolitan Museum of Art, New York.

“For my own part, I would rather excel in knowledge of the highest secrets of philosophy than in arms.”— Attributed to Alexander the Great

I remember, as if it was yesterday, the enthusiasm with which a teacher of ours in school used to read out and narrate to us the ‘story’ of Alexander the Great which was in our prescribed syllabus. The lesson was in Urdu: the name was written and therefore pronounced as Sikandar, which in the telling sometimes sounded like Iskandar. But, for our teacher, he was always Sikandar-e-Azam, the Great Sikandar. While describing his conquests and his learning, his nostrils would flare up a little, and a seldom seen shine would appear in his eyes. “Do you know how the Hindi-walas call him?” he would ask, and then add with a little sneer, “Alakshendra, even Alak-sundar. But no, he was Sikandar, Sikandar-eAzam.” Every now and then, our teacher would turn philosophical, and recite for our benefit: “Sikandar jab chalaa duniya se, donon haath khaali the.” [When he left this world, both his hands (stretched out of his shroud) were empty, for everyone to see]. “There is nothing that we will take to the other world: humility he taught us, and the fruitless-ness of gathering material wealth.”

I have no idea where this quite moving line of verse comes from: possibly from a Persian source, for Alexander’s is a prominent presence in some of the greatest works of Persian literature: from the Shahnama of Firdausi to the Khamsa-s (quintet) of Nizami and Khusrau. No one knows for certain, but then this is the very essence of the legend of Alexander. The lives of great figures get surrounded by legends which keep growing like barnacles that cling to the bottoms of great ships and thrive. There are, on the one hand, well-documented facts about the life of Alexander, son of Philip of Macedonia, descendant of the demigod Hercules, tutored by none other than Aristotle. This we know. Most of his deeds — who, for all the campaigns he led, all the conquests he made, all the questions he raised, died at the young age of 33 — were recorded during his lifetime and shortly afterwards, leaving an imprint on the scroll of time that would be hard to equal. Equally large, on the other hand, are stories, of each of which he is the hero, which might have had a core of facts, but which kept on being edited and embellished and embroidered over centuries.

Take the case of the uplifting story about Alexander’s encounter with that faqir-like figure, the philosopher Diogenes of Corinth. There are many versions of the story, but possibly the most reliable one comes from Plutarch, the 1st century Greek philosopher and historian, who wrote extensively on the lives of many great leaders of men. After his great successes, he says, Alexander was lionised and attended upon by many statesmen and philosophers. But Diogenes not being one of them, Alexander decided to go and see him in person, only to find him lying in the sun. “Diogenes raised himself up a little when he saw so many people coming towards him,” Plutarch writes, “and fixed his eyes upon Alexander. And then that monarch addressed him with greetings, and asked if he wanted anything. ‘Yes,’ said Diogenes, ‘stand a little out of my sun.’” Alexander was so struck by the boldness and the scorn for power of Diogenes that he is believed to have said to his followers: “But truly, if I were not Alexander, I wish I were Diogenes.”

The last utterance is not unlikely to have been an embroidery around the fact of the encounter, designed to laud and project him as a more or less virakta person himself: a philosopher-king. But there are other legends which bring out this mix of fact and fiction more clearly perhaps. In the last hours of King Darius of the Persian Empire — Dara as he is named in Persian chronicles — whom he had defeated after a protracted and bitter war and who lay dying, Alexander, the legend says, wept bitterly, with his rival’s head in his lap. With him, again, is associated the invention of the mirror, Alexander having expressed a wish that some day he would like to see both reality and the illusion of reality at the same time. This set gifted craftsmen scrambling around and eventually produce a sheet of metal so highly polished and burnished that things were reflected in it nearly perfectly: approximating to a mirror, as we know it. Aaina-e Sikandari — the Mirror of Alexander — is how it is still referred to. Then, of course, there is the legend — told in great detail and with much love in Persian texts, like the Iskandar-nama — of Alexander having, in the course of his travels, come upon a tree, called wak-wak, in the leaves and branches of which stayed nearly hidden countless creatures, each speaking in a tongue that no one other than themselves could understand. Great paintings, as we know, have come down showing this Speaking Tree under which Alexander is seen standing, looking up, lost in the wonder of incomprehension.

In another extraordinary legend — I came upon it only recently but apparently it kept being told repeatedly in medieval Europe — Alexander’s inexhaustible curiosity is reflected. After having conquered nearly half of the world, Alexander, it is said, wanted to see what was under the waters of the ocean. He got built for himself, therefore, a ‘diving bell’, something like today’s bathysphere — a secured container with glass walls which could be lowered into the sea with a chain — in which he could sit himself. What he saw at the bottom of the sea — big fish devouring small fish, creatures of shapes beyond imagination, things suddenly appearing from nowhere — both elated and frightened the king. In one telling, the experiment ended by the king chiding himself: “Alexander, now you must give up attempting the impossible, or you may lose your life in attempting to explore the deep.”

Without any fear of losing their lives but stretching their imagination to its limits, however, many painters kept envisioning this scene, as much as the appearance of the king himself. Perhaps the most delicate among these visualisations is the work of Mukund, a painter at the Mughal court under Akbar, who was interpreting the scene as described in Amir Khusrau’s famous Khamsa, but imagined Alexander not as a handsome helmet-wearing, golden-haired Greek warrior, but as a turban-wearing, truth-seeking Sufi.