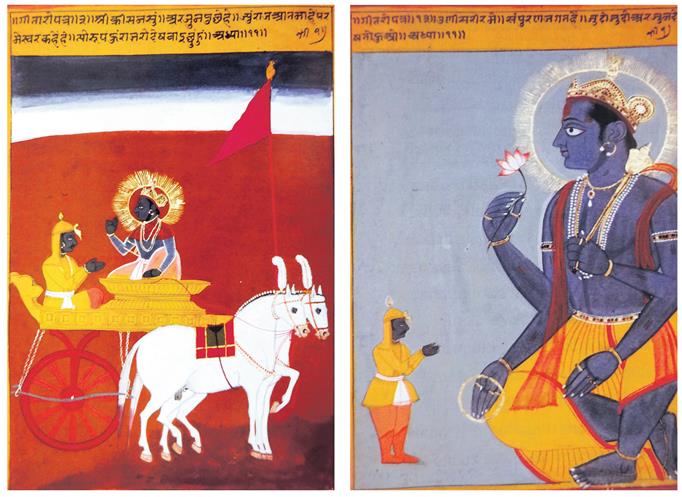 A typical page from the series, showing Krishna and Arjuna in conversation. The leaf relates to shloka 3 of the 11th chapter; An aspect of the Vishwa-rupa of Krishna, towering over the small figure of Arjuna. From the 11th chapter.

I owed a magnificent day to the Bhagavad-gita. It was the first of books; it was as if an empire spoke to us, nothing small or unworthy, but large, serene, consistent, the voice of an old intelligence which in another age and climate had pondered and thus disposed of the same questions which exercise us. — Ralph Waldo Emerson: ca. 1850

In the morning I bathe my intellect in the stupendous and cosmogonal philosophy of the Bhagavad-gita, in comparison with which our modern world and its literature seem puny and trivial. — Henry David Thoreau: ca. 1850

When doubts haunt me, when disappointments stare me in the face, and I see not one ray of hope on the horizon, I turn to Bhagavad-gita and find a verse to comfort me; and I immediately begin to smile in the midst of overwhelming sorrow. Those who meditate on the Gita will derive fresh joy and new meanings from it every day.   — Mahatma Gandhi

He (the artist) resolves Arjuna’s dilemma in terms of his own practice as a      painter. The work’s sophistication suggests that the painter thinks of his art as an act of knowledge-making. Indeed, the discipline of crafting a work of such sublimity is possible only if the artist imagines he is as dedicated to his art as Arjuna is to his skill as a fighter; that each line he draws or colour he selects is part of a spiritual discipline. — Alok Bhalla and C.P. Deval

The discovery and publication of this series is some kind of a landmark, for nothing of this dimension has surfaced till now. The two authors, Alok Bhalla and Chandra Prakash Deval, were led to this series by the curator of the Government Museum in Udaipur, Mubarak Ali

It is not that I have not written on the Bhagavad-gita in this column before: I have. I recall having drawn attention at different times to an uncommon group of illustrated leaves in the Chandigarh Museum which have the text, both in Sanskrit original and its rendering in Takri — the script of the hills — in the centre and illustrations in the margins; to a series of Pahari paintings which I helped, years ago, the Shri Krishna Museum in Kurukshetra to acquire; I have also spoken of Kashmiri gutkas of the great text in which, very often, a few illustrations are inserted. But the occasion for the writing of the present column is different, for I concern myself here with an extensive, remarkably extensive, series of paintings that ‘illustrate’ virtually each shloka of the great text, and has been the subject of a very recent publication.

The publication is titled: The Gita: Mewari Miniature Painting (1680-1698) by Allah Baksh. The discovery and publication of this series is some kind of a landmark, for nothing of this dimension has surfaced till now. The two authors — Alok Bhalla, widely published litterateur and critic, and Chandra Prakash Deval, poet, translator, bibliophile and cultural historian — were led to this series by the curator of the Government Museum in Udaipur, Mubarak Ali. Apparently, related to a massive pile consisting of nearly 4,000 paintings of the Mahabharata, the Gita alone is dealt with in close to 500 folios, each leaf taking up just one shloka. The entire set is distributed over the Govt. Museum in the City Palace in Udaipur; the Udaipur Sangrahalaya, Ahar; and the City Palace Museum in Jaipur. For years these paintings have just lain there.

The Bhagavad-gita is, as we know, essentially a philosophical text, bursting with abstract ideas and truths, but also at places with majestic descriptions. Most other series dealing with it content themselves with just a few visuals, but this series is far more ambitious than that, the painter/s setting out to provide visual parallels to practically each shloka, as said before. The task chosen is, therefore, most challenging. What is done here then is that a motif is picked up or devised — a roofless chariot driven by two horses on the field of battle in which Krishna, his complexion ‘dark as a cloud’, and his head surrounded by a glittering, sun-like nimbus, sits speaking to Arjuna, who, clad warrior-like in coat of mail, listens or asks troubling questions — and placed boldly in the centre of nearly each leaf, occupying more than half the space on the sheet.

On the sides, or above, or below, are introduced small subsidiary figures personifying ideas or scenes of actions envisioned in the great sermon: sages meditating; men grieving over the dead; the soul ascending heaven-wards; devotees bringing gifts to mentors; men performing good deeds or bad; and so on. Each leaf has a surround of the familiar Mewari idiom of narrow borders, lac-red in colour with an inner margin in bold yellow touching the main body of the leaf. Above, at the very top, the painter/s bring in a narrow band of yellow in which, in prose, the essence of a shloka in Mewari dialect, based on the original Sanskrit, is written. Each two or three-line text begins with the identifying words: ‘gita ro patra’ [leaf of the Gita], followed by the number of the shloka and, after the excerpt from the text, noting the number of the adhyaya or chapter from which the shloka is taken. What is even more — something to which the two authors, oddly, have not paid any attention — in a corner are laconic notes which read as “ki’ followed by a number in Rajasthani accounting numerals, such as “1-12”. This, interestingly, is an evaluation note giving almost certainly the money paid for the painting of that leaf: ‘ki’ standing for ‘keemat’ meaning price or wage, and the numerals standing, as in this case, for ‘one rupee and barah anna’ or something similar in the local money of account.

One can go, like this, into countless things as far as this extraordinary series is concerned: commenting on the quality, speaking of the near-sameness of the setting on each leaf, registering the inbuilt difficulty of rendering a philosophical text in visual terms, noting the studious effort made by the painter/s to vary the background colour in each leaf or arbitrarily changing the number of spokes on the wheels of the chariot, and so on. One can also register the fact that the series is attributed to a Muslim painter — Allah Bakhsh is the name the two authors have relied upon — working for the royal court of 17th century Mewar, but then that comes as no great surprise since other Muslim painters like Sahib Din who painted a Ramayana series or a Rasikapriya set at the same court, are also known. But these are matters of detail, or, at times, subjects of disagreements, best left to scholars. For everyone else, here is a series in which, like Thoreau, one has the opportunity to ‘bathe one’s intellect’, and to soak in the glory of one of the greatest texts of all times.