Artistic treasures from the region have long remained neglected, a recent seminar reminded 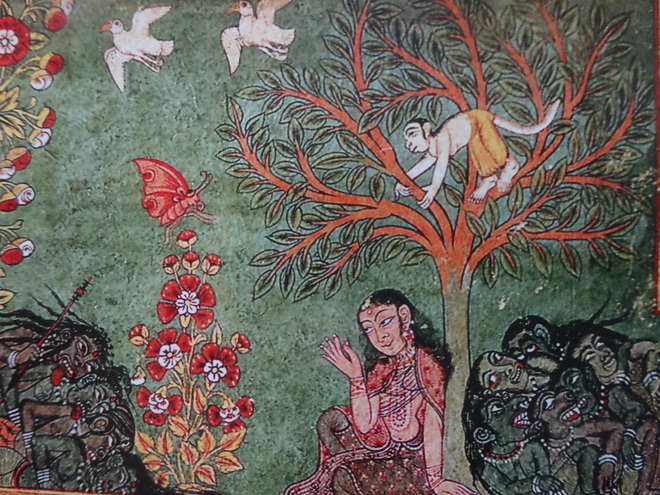 Sita in the Ashok Vatika. From a Ramayana manuscript in the Chaliha Bareghar Satra.

At the very centre of Jambudvipa — (that is the ‘island-continent’ of which India, our land, is a part, according to sacred geography) — stands “the all-gold Mount Meru, the king of all mountains. …It is as high as the extent of the continent itself; it forms the pericarp of the lotus in the form of the earth. It is thirty-two yojanas in extent at the top, and sixteen thousand yojanas at its foot, and its root lies as deep under the earth’s surface ….”

Slowly, but fortunately surely, more is being written, more images are emerging from the north-eastern region of our land, from Assam, reminding us of the great artistic treasures that lie there and have remained neglected. It is remarkable, in fact, how little we — those of us concerned with the history/histories of art — have known, and how much we have erred. Occasionally, a fragment or two might flash upon our awareness, but, everything considered, barely a mention of these finds place in our discussions or accounts of painting in India. When a scholar, therefore, draws our attention compellingly toward this art, as Samiran Boruah did recently in one of the enriching seminars that the Jagdish and Kamala Mittal Museum of Indian Art has been holding in Hyderabad, one experiences a sense of waking up.

Why, at the very beginning, I cite a passage from that great and ancient text, the Bhagavata Purana, is because that is the text which appears, and is illustrated, far more frequently than any other work from Assam. After all the upheavals — invasions by the Burmese, internal fissures, among others — that Assam had gone through, a sense of relative calm appears to have descended upon the region with the appearance of the great teacher, Sankaradeva (1449-1568), the most famous of all Vaishnava saints active in that area. Being an ardent devotee of the text, the Bhagavata Purana, which eulogises with great passion the great God Vishnu, he established several namghars and sattras — prayer halls and monasteries — in which the manuscripts of the book, puthis as they were called, were objects of worship in themselves. Sankaradeva himself was a writer — and by some accounts also a painter — and Anadi Patan, a work which is virtually the Assamese version of the Bhagavata, is attributed to him. From that text, I take just one example, one image — I published it close to six years back — to speak at some length about the kind of work from Assam that we need to pay close attention to.

The Bhagavata, being a Purana, is not simply a narrative; the text — running as it does into 18,000 verses — is also replete with philosophical dialogues, speculations about life here and hereafter, deep insights into the human mind, as also soaring descriptions of places that no one had ever set sights on. There are whole chapters filled with mythological geography: what the universe is made up of and what it looks like. Among them occur wonderful descriptions of the axis mundi, the very centre of the universe, which is Mount Meru. While the immeasurable extent of the mountain is given, as in the passage above, the text says: “As side supporters on its four sides are four mountain ranges: Mandara, Merumandara, Suparshva and Kumuda, each ten thousand yojanas in length and height. There stand respectively on these four mountain-ranges, four great trees, viz. the Mango, the Jambu, the Kadamba, and the Banyan, like the flags of these mountains. … The trunk of each (of these celestial trees) is one hundred yojanas in circumference…. Like filaments on the seed-vessels in a lotus, around the base of Meru, on all sides there are other smaller mountains…” So on it goes, almost endlessly, describing lakes and rivers and winds and fragrances. It gets to be heady, as one reads and tries to envision the sights.

The Meru has been described in different texts, too, but no two descriptions agree. In any case, one can see that in ‘rendering’ or ‘illustrating’ the great mountain, the painter was clearly on his own, considering that ‘no human being can adequately comprehend this creation’, as the text states. He, therefore, sets off, unfettered, letting his imagination soar. In the illustration from the Anadi Patan manuscript, which is reproduced here, one sees that at the heart of the folio describing the Meru is the great mountain itself, bathed in gold, rising in tiers from the bottom to the top, one inverted-cone shape topping another. These gold cones are contained in a stepped pyramid, painted in red ochre. They look as if they were vessels, on whose top rim curling handles are attached. Are these there, one begins to think, for the gods to lift them with? Each of the cones is larger and more decorative than the one below it. On either side of this glistening structure are two gently curved forms filled with colourful wavy stripes, leaning away from Meru, yet supporting it. These, of course, are the four mountains that the text describes, their names inscribed at the bottom of the folio, just below the image: Suparshva and Kumud on the left, and Mandara and Merumandara to the right. On the tip of these mountains one can see vegetal forms — part leaf or bud, part stem — that resemble nothing recognisable but stand here for the four celestial trees that the text speaks of. There are, at the same time, other forms or shapes, also unidentifiable. Thus, at the bottom, seven broad stripes on either side: seven layers of the earth perhaps?

There are remarkable abstractions here: visual statements about the incomprehensible. They occur in manuscript after manuscript painted — a local innovation, again — not on paper but on sanchi pat: folios made from the inner bark of the aloe tree (aquilaria agallocha). But no two renderings of the Meru are exactly alike, the imagination of different painters leading them along different paths. This is not all, it needs to be stated, that painting in the north-east is about: there are, of course, other texts, other expressions, some of them bearing the influence of the more ‘classical’ styles prevalent and practised in other courts and other areas. One is just beginning to enter the field, in a manner of speaking. Questions come screaming in.

One of them is about who the painters of these stunning images were. There are no easy answers. As a great poet said: Kaun jaaney ki yeh jalwa-giri kis ki hai? [Who knows who brought these wondrous sights together?]