The once grand principality of Dujana between Rohtak and Jhajjar is in ruins, thanks to the indifference of government and locals 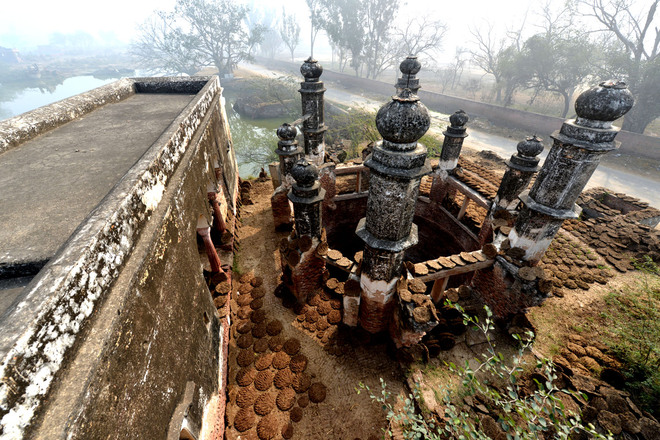 The nawabi-era buildings and other structures are in ruins. Photos: Ranbir S Phaugat

Dujana, a former princely state, lies in a state of utter neglect. Characterised by magnificent mosques, grand nawabi havelis, architectural marvels and heritage buildings like Khurshid Palace and Bagh Wali Kothi, majestic wells and ponds in its heyday, the place has changed beyond recognition.

After the last nawab of Dujana migrated to Pakistan along with his family at the time of Partition, the erstwhile capital of Pathan Principality got reduced to a village along National Highway 352, between Rohtak and Jhajjar. Nevertheless, the relics of the nawabs’ havelis, some still-intact mosques, an old baoli and dilapidated remains of some grand old buildings remind one of the bygone era.

Due to the lack of maintenance, the nawabi-era buildings and other structures are in ruins — the villagers use these heritage sites to rear cattle and prepare dung-cakes. Local residents maintain that if the authorities concerned had taken care of Khurshid Palace, Bagh Wali Kothi, mosques, wells, ponds and baoli of Dujana, these would have been still intact.

“People continue to encroach upon these sites and take away wooden, marble, stone and glass fittings with impunity,” laments Naveen Ahlawat, a resident of Dujana.

Apart from the government apathy and indifferent attitude of the villagers, the floods in 1995 also caused much damage to the heritage buildings and structures.

Of the 30-odd mosques located in Dujana, only the Lal Masjid, where some scenes of the Aamir Khan-starrer Bollywood movie Mangal Pandey: The Rising were shot, has been maintained well by the Haryana Waqf Board.

“Dujana has witnessed a gradual decay of heritage-value property over the past decades. Several buildings of the nawabs’ time are on the verge of collapse. The memorial tombs of the family members of the nawabs and a graveyard located adjacent to the kachehri are in a pitiable condition,” observes Haryana’s noted cultural historian Ranbir S Phaugat.

He points out that the Dargu Walah well in Dujana, which is probably the largest well in the state, is also lying in a state of neglect. “Only the fine masonry buildings of a school and a hospital are noticeable now.”

In what can be termed ‘better late than never’, the Haryana State Directorate of Archaeology and Museums has now pulled up its socks and started the exercise to take over some heritage buildings and structures of Dujana for restoration.

“We have initiated the process to take over Lal Masjid, Bagh Wali Kothi and Dargu Walah well and the adjoining baoli for restoration,” reveals Dr Banani Bhattacharyya, Deputy Director at the state Directorate. The move of the Haryana Government comes as a ray of hope to revive the nawabi-era grandeur of the erstwhile princely state.