As against his family members, Gaganendranath remains the least talked about, the least understood, the least appreciated 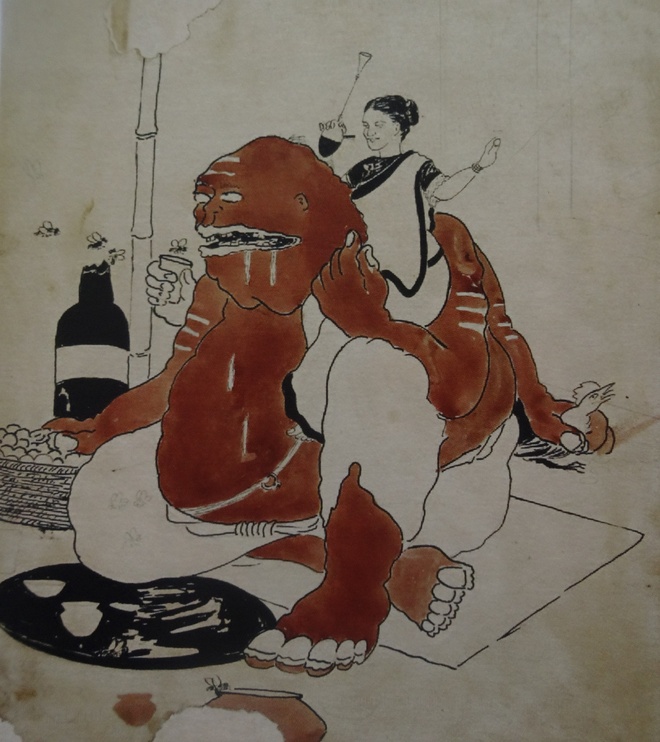 What profoundly attracted me (to Gaganendra’s work) was the uniqueness of his creation, a lively curiosity in his constant experiments and some mysterious depth of their imaginative value… He sought out his own untrodden path of adventure, attempted marvellous experiments in colouring and made fantastic trials in the magic of light and shade.”

Capturing tensions of participation and denial, desire and derision, caricature provided polemical tools for visualising resistance in the colony. Under Gaganendranath Tagore, the genre was transformed into an aesthetic of rupture, bringing to visual art hitherto unexplored vocabularies of critique and expressionism. His cartoons reveal corporeal mechanisms at work that fused figuration with rhetoric, a satirical eye with modernist form, and politics with play.

Of all the enormously gifted, and visionary, members of the Tagore family that dominated the cultural scene in Bengal at one time, Gaganendranath remains, just possibly, the least talked about, the least understood, and the least appreciated. Everyone knows the gloriously celebrated Rabindranath (1861-1941), of course: poet, philosopher, painter, music-composer, teacher, Nobel laureate, founder of great institutions, among many other things; the universally acknowledged ‘Gurudev’. His nephew, Abanindranath (1871-1951), founder so to speak of the ‘Bengal School’ and a key figure in the Indian ‘Renaissance’, was a teacher, an inspirer beyond compare in the eyes of aficionados. But Gaganendranath (1867-1938), older than Abanindranath by four years, flits in and out of one’s mind as a somewhat elusive figure, a gifted man who ploughed more than one furrow in his artistic career. There are, to be sure, critical notices of him that appear from time to time, but if you were to ask the common man even in Bengal about him, you might get a quizzical look in return. “Who? Gaganendranath? Let me see …”

Any analysis of the total body of the work he left behind will tell us that there were different phases that he went through; the early forays, classical in a manner of speaking, in which he did some remarkably simple but moving portraits: family, sister, wife, and all. There was a time in which he, like the rest of the Tagore and Shantiniketan family, saw, encountered, and worked with Japanese works and techniques. But then tragedy struck: Gaganendra lost his young son of 16 years and, as per all accounts, never did recover from this loss. He withdrew into himself and it took prodigious efforts on the part of the family and a kirtana-kar to pull him out of the pit of despair into which he had sunk. That is when he moved somehow into the world of the great Vaishnava saint and devotee, Chaitanya, and painted him again and again: now leaving his family without saying a good-bye; now stealing a glimpse, from behind a pillar, of the triad of images that are installed in the great Jagannath temple in Puri; now joining others singing and dancing with abandon, the name of Krishna on his lips. To mark his devotion, Gaganendra even designed a seal, Japanese fashion, featuring the sacred footprints of Vishnu, which he routinely printed on his work as a signature. But then, almost without communicating with anyone, he turned to caricaturing, most of his themes taken from the hollow, slavish life that average Bengali bhadralok had started living under the shadow of the English masters. The pseudo-Anglicisation, the crass mimesis of manners, the slavishness of attitude, all irked him, burnt him up on the inside, and out came cartoons pouring scorn over men and manners of his times, especially against the background of the stirrings that the nation had started going through. The nation was beginning to go through a spiritual crisis and somewhere Gaganendra must have felt very involved. This ‘participation and denial’, this combination of ‘desire and derision’, as Sanjukta Sundaresan puts it, must have sent spirals of anger and acidic wit raging through him. His are not cartoons of the highest grade, but something shines through them: the felt experience, the will to uncover hypocrisies, the invidiousness of our caste system, the masks that people put on.

Yet another turn, and Gaganendranath could be seen responding to the winds of ‘modernity’ in art that had started sweeping across Europe at that time. Especially the revolutionary new movement of Cubism, which challenged old notions of light and shade, of the treatment of solids in forms. He was in touch with developments in Europe and the Indian Society of Oriental Art — which he had helped found — took the initiative of getting a major exhibition of ‘modern art’ to India. Gaganendra was quick to weave something of these new ways in his own style and if he is remembered today — that is, when he is remembered at all — it is as an Indian Cubist. There is a debate about all this in circles of art, but truly speaking Gaganendranath was not copying European art in imitation: somewhere within himself he had begun to explore a different path: in Rabindranath’s words, displaying ‘a lively curiosity in his constant experiments and some mysterious depth of their imaginative value’.

Where does all this leave us when it comes to describing Gaganendranath’s work? The trouble is that we all keep looking for labels, for a drawer of category in which to put him. It may be important on the other hand to free him from these confines and see him as a free spirit: gifted, and with a will of his own. Being a relatively shy man, uncomfortable with the glare of publicity, he did not claim much for himself: pronouncing himself to be championing this mode or that was not, I think, his wont. If he remains an enigma, perhaps we should let that be.

Gaganendra did not like noises, certainly not the kind that Mark Twain once described when he heard people tom-tomming their own achievements. “Noise proves nothing,” he famously wrote once. “Often a hen, who had merely laid an egg, cackles as if she has laid an asteroid.”