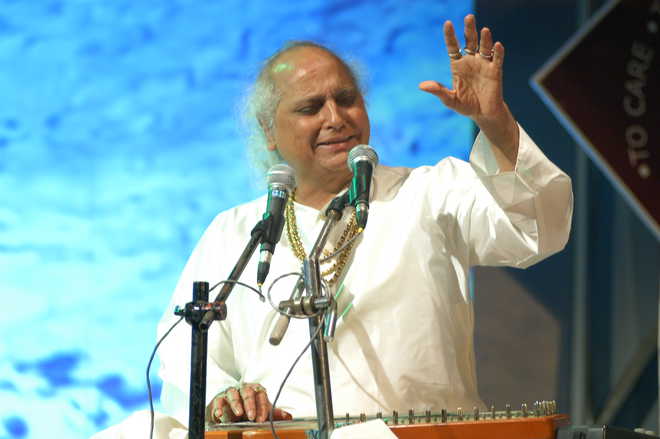 Indian classical music doyen Pandit Jasraj died on Monday following a cardiac arrest at his home in New Jersey, his daughter Durga Jasraj said. He was 90.

The classical vocalist, who infused life into the most complex ragas and held audiences spellbound with his craft, leaves behind a storied legacy spanning more than eight decades.

He is survived by his wife Madura, son Shaarang Dev Pandit and daughter Durga Jasraj, both musicians.

“Bapuji is no more,” his daughter Durga told PTI over phone from Mumbai. She was inconsolable and could not speak any more.

Pandit Jasraj, who belonged to the Mewati Gharana and was one of India’s greatest music legends, was in the US when the coronavirus-led lockdown happened and decided to stay back in that country.

Demonstrating his ability to adapt with the times, his last performance was in April this year. He sang on Hanuman Jayanti for the Sankat Mochan Hanuman temple in Varanasi through Facebook Live.

“With profound grief we inform that Sangeet Martand Pandit Jasraj ji breathed his last this morning at 5.15 EST due to a cardiac arrest at his home in New Jersey, USA,” a statement issued by his family said here.

“May Lord Krishna welcome him lovingly through the doors of heaven, where Pandit ji will now sing Om Namo Bhagwate Vasudevaya exclusively just for his beloved Lord. We pray that his soul rests in eternal musical peace. Thank you for your thoughts and prayers,” it said.

Among those who mourned the death of the world renowned maestro were President Ram Nath Kovind and Prime Minister Narendra Modi.

The prime minister added that his unfortunate demise “leaves a deep void in the Indian cultural sphere”.

“Not only were his renditions outstanding, he also made a mark as an exceptional mentor to several other vocalists. Condolences to his family and admirers worldwide. Om Shanti,” the PM tweeted along with two pictures with the vocalist.

Home Minister Amit Shah described Pandit Jasraj as an “incredible artist who enriched Indian classical music with his magical voice” and said his death felt like “a personal loss”.

Pandit Jasraj was awarded the Padma Vibhushan, Padma Bhushan and the Padma Shri.

“RIP PanditJasraj Indian classical music has lost one of its shining stars,” he tweeted.

Composer Shankar Mahadevan said he was devastated after hearing the news that Pandit Jasraj has moved on to the “next dimension”.

“A big void in the world of Indian Classical music. His music will live on in this planet,” he wrote.

“So many insanely beautiful memories you have given me… but I have no words now.”

In an interview with PTI on his birthday this January, Pandit Jasraj had spoken about being in sync with times and technology.

“I teach through Skype. I suggest everyone do it. I am walking with time and that’s what one should do. I don’t like when people say ‘Woh zamaana achha tha’ (Those were the good times).

“I believe the current phase is good. One should not compare it with the past—good or bad. One has to walk with time and only then you will like the current time,” he had told PTI in an interview.

The classical music stalwart had also spoken about his eclectic taste in music and fondness for melody queen Lata Mangeshkar.

“I listen to western music, African music and also cinema music. My all-time favourite is Lata Mangeshkar, there is no one like her. I often talk to her. I watch movies, I catch up on films on OTT platforms. Whatever my granddaughter plays it, I see it,” he had said.

He also sang in the movies.

His first song was in 1966 with the bhajan “Vandana Karo” in raga Ahir Bhairav for his father-in-law V Shantaram’s “Ladki Sahyadri Ki”. The bhajan was composed by Vasant Desai.

Pandit Jasraj’s second film song came almost after a decade in the 1975 movie “Birbal My Brother”, for which he collaborated with another legend, classical vocalist Pandit Bhimsen Joshi, on a ‘jugalbandi’ in raga Malkauns.

His rendition of raga Ahir Bhairav was also used by filmmaker Ang Lee in his Hollywood movie “Life of Pi”. — PTI