Monuments and statutes face the wrath of changing times

As monuments and statues face wrath of changed times, where does one find personages that are perfect in all ways and fit to be celebrated? 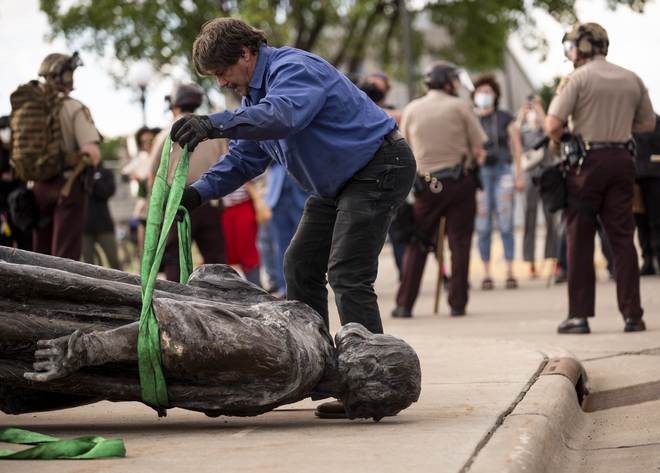 In general, pride is at the bottom of all great mistakes. — John Ruskin

The rereading of history is a constant process, and no statue, any more than any historical figure, should be guaranteed a permanent place in the national Pantheon. — The Irish Times

Currently there is so much in the air about statues in public places: how they are being felled, disfigured, decapitated, sunk, blown up, in country after country, in the wake of anti-racism protests against the brutal killing in America of a black man, George Floyd, by a white policeman. So much is coming together in these protests — anger, hatred, bewilderment, politics, divisiveness — that they have turned into a world-wide movement: Black Lives Matter. Of course, they do.

To remind oneself: statues of individuals are seen naturally as symbols, and behind raising them in the first instance can lie a variety of considerations: admiration, gratitude, celebration, acknowledgement, among them. But also, importantly, hubris, especially when a person in power, unbridled power in fact, decides to raise a statue to celebrate himself, unmindful of what Time will do to it, or to memory. Speaking of hubris — and how things turn out in the end — one cannot but think of Shelley’s wonderful poem, Ozymandias, fabled ruler of Egypt, which I am tempted here to citein full.

I met a traveller from an antique land,
Who said — “Two vast and trunkless legs of stone
Stand in the desert. . . . Near them, on the sand,
Half sunk a shattered visage lies, whose frown,
And wrinkled lip, and sneer of cold command,
Tell that its sculptor well those passions read
Which yet survive, stamped on these lifeless things,
The hand that mocked them, and the heart that fed;
And on the pedestal, these words appear:
My name is Ozymandias, King of Kings;
Look on my Works, ye Mighty, and despair!
Nothing beside remains. Round the decay
Of that colossal Wreck, boundless and bare
The lone and level sands stretch far away.”

Clearly, hubris meets its end — those ‘colossal wrecks’, in the “boundless and bare” stretches of land all around them stand witness — but behind the destruction of statues is not Time or Nature alone; in the current situation what is behind these fellings and disfigurations is pent-up anger against the injustice of man to man. To the rankling discrimination and discriminatory policies against ‘blacks’ in general have been added dark memories of slavery and slave-trade of the past. Statues of personages, which have dotted the landscape of cities and squares, adorning them in fact, not for decades but for centuries of time, have suddenly turned into targets. This, because long-buried but never forgotten associations of slavery and slave-trade with famous names, have surfaced again. In America, even the founding fathers of the state — George Washington, Thomas Jefferson — have not been spared, their statues being toppled or defaced at place after place. Why? Because they owned slaves who were made to work on their lands and in their homes. What started for the most part in the southern part of the country, in what is considered the Confederate area, with reference to the Civil War in which the south sided with slavery and the old way of life, has spread to the north and beyond. The list of names is lengthening by the day: Jefferson Davis, President of the Confederacy; General Robert Lee; Andrew Jackson; General Casimir Pulaski; General Albert Pike; the editor, Edward Cormack.

The movement — the eager desire to right the wrongs of the past — has kept on stretching both in respect of time and of space. For someone as widely celebrated as Christopher Columbus, 15th-century ‘discoverer’ of America, has not escaped the net and not at one place, but at so many, been dislodged from his pedestal and made to ‘bite the dust’. A statue of Abraham Lincoln, the one who fought and won the great Civil War and liberated countless slaves, has been under serious threat for it showed a freed slave bending to him. From the United States the burning flame of anger leapt to England and Europe, as one reads. A bronze monument of Edward Colston, standing in Bristol, could not withstand the wrath of a vast crowd which remembered that he traded in slaves and had imported them in huge numbers: some 80,000 of them shipped and brought in from Africa. In Oxford, the statue of Cecil Rhodes, the great colonialist, whose oppressions in Rhodesia — now called Zimbabwe — have been meticulously recorded, was collared. In Belgium, and other countries in the neighbourhood, King Leopold’s statues were disfigured, daubed with paint, and toppled, for crowds recalled the reign of terror he had unleashed upon Congo once. Lenin has been brought down from his pedestal at more than one place in the former Soviet Union, and one recalls statues like those of King George III, or Saddam Hussein having been pulled down by angry crowds.

Predictably, but alarmingly, to the morally angry crowds have been added just plain vandals. Someone in Egypt drew up and shared step-by-step instructions on how ‘one might pull down an obelisk with ropes and brute force’. Elsewhere, an art conservator shared a dastardly way to destroy bronze statues: not paint them but infect them with bronze disease, for while paint can be washed off, bronze corrosion is irreversible. After the statue of a peaceful priest had been torn down, someone said this should be done to all statues of Jesus Christ, too, for they are nothing but a ‘form of white supremacy’.

My intent here is not to draw up and present an inventory of felled or falling statues. It is to draw attention to the questions being increasingly asked. Where do we go from here? Is everything, everywhere, going to get out of hand? Can history be erased in this manner? Is there any room left at all for monuments and statues in this world? If there is, where do we find personages that are perfect in all ways and therefore fit to be celebrated: solah kala sampurna, as we say here? There are no easy answers, and one can almost see furrows beginning to appear on worried brows all over the world. At home, of course, there is not much thinking yet on the subject that one sees. All that one can see is hubris in the dusty cloud of which statues will continue to be raised by persons in power, and everyone else will continue saying, as the poet said about life in general: nai haath baag par hai, na paa hai rikaab mein. ‘The reins are not in our hands, nor are our feet in the stirrup’.