He and wife Satinder painstakingly and lovingly put together, over decades, a premier collection of Sikh art, when no other such collection existed 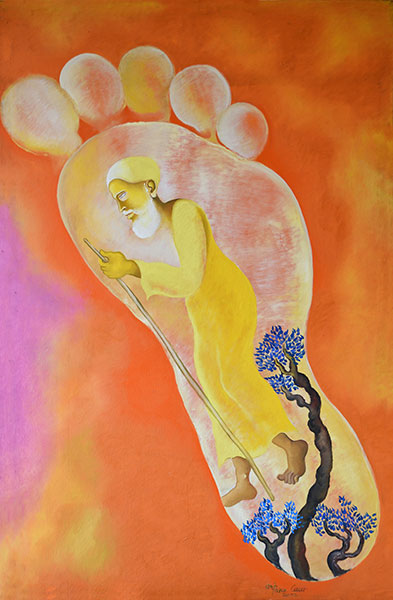 The Sikh Foundation released a press note saying his deep appreciation of the arts inspired his vision to establish the first permanent Sikh art gallery in the United States at the Asian Art Museum in San Francisco (2003) and in Canada at the Montreal Museum of Fine Art (2019).

Born on October 31, 1926, in Moga, India, he grew up in Dehradun. He married Satinder Kaur while working on his doctorate at the Imperial College in London. The couple soon migrated to the United States living at Rochester and Chicago before moving to San Francisco in 1961, where he started his trailblasing entrepreneurial and academic career.

He and Satinder painstakingly and lovingly put together, over decades, a premier collection of Sikh art, when no other such collection existed. The collection displays a wide range of Sikh artistic expression from the 17th to the 21st century. It has been documented in a visually rich volume ‘Sikh Art from the Kapany Collection’ edited by Dr Paul Michael Taylor and Sonia Dhami and co-published with the Smithsonian in 2017.

He created the Sikh Foundation in 1967, pioneering the display of Sikh arts at the first Sikh art exhibit in the west, ‘Splendors of the Punjab’ at the Asian Art Museum in San Francisco (1992). This was followed by the blockbuster exhibit ‘The Arts of the Sikh Kingdoms’ at the Victoria and Albert Museum in London (1999) travelling to the Royal Ontario Museum in Toronto and the Asian Art Museum in San Francisco. The Rubin Museum in New York (2006) showcased ‘I See No Stranger’. The Smithsonian Institution in Washington DC displayed ‘Sikhs-Legacy of the Punjab’ (2004-2007) which travelled to the Santa Barbara Museum of Natural History (2009), Fresno Art Museum (2012) and the Institute of Texan Culture in San Antonio (2016).

A champion for contemporary artists, Dr Kapany included within his collection numerous works by the renowned painters Arpana Caur and Devender Singh, recently showcased in the exhibit ‘Expressions of Divinity’ at The Triton Museum of Art in Santa Clara (2019).

His numerous awards and honours include The Excellence 2000 Award from the USA Pan-Asian American Chamber of Commerce in 1998, the Pravasi Bharati Award by the Indian Government in 2008, the Fiat Lux Award by University of California in 2008 and the Asia Game Changer West Award in 2019.

Narinder Kapany was a man of enormous intellect, boundless energy and a loud and infectious laugh. His passionate commitment to art and science left an indelible impact.

Himself an artist, his ‘Dynoptic Sculptures’ were displayed at the Exploratorium in San Francisco (1970), Monterey, Chicago and Palo Alto.

He spent the last year writing his memoirs, ‘The Man Who Bent Light’, which the Sikh Foundation hopes to make available by Spring 2021.