National Civil Right Museum: An ode to the human spirit 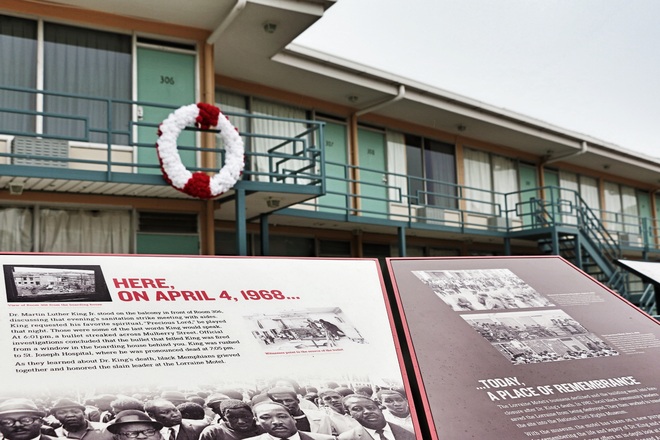 We shall overcome: A view of the National Civil Rights Museum in Memphis, USA. It is housed in the Lorraine Motel where Martin Luther King, Jr. was assassinated.

In the city of Memphis in the southern US state of Tennessee, an unassuming motel’s balcony forms the starting point of this mecca of documentation of the American Civil Rights Movement. It is at this very balcony, of Room 306 at the Lorraine Motel, that Martin Luther King, Jr. — the most prominent leader of the movement — was assassinated on April 4, 1968. The motel isn’t in operation today but his room and balcony form an integral part of this museum’s exhibits.

The National Civil Rights Museum was established in 1991 to document and showcase various facets of the American Civil Rights Movement. Despite it going against the basic tenets of Declaration of Independence, slave trade was extremely common in the country. Rice, sugar, rum, cotton, and tobacco were the lucrative crops grown on these plantations. The museum, to begin with, highlights how this happened, including a system of bondage that turned people into property and stripped them of basic human rights. There’s one jaw-dropping story of Abdul Rehman Ibrahima, a West African prince who was kidnapped and sold to a cotton plantation in the southern US state of Mississippi in 1788. Ibrahima wrote a letter in Arabic to the Moroccan sultan who then negotiated his release in 1826. Despite dire circumstances, many enslaved Africans never accepted their fate: some showed quiet acts of defiance, some held on to their traditions and faith, while others took to petitions and protests, and even “stole themselves” as they ran away. One such story is of Harriet Tubman who, after 30 years of labour, earned the moniker of “Moses” as she escaped and led 130 slaves, including her parents, to freedom.

Further exhibits showcase how, with the introduction of the 1896 Plessy v. Ferguson ruling, the “separate but equal” concept became prominent. Racial segregation (the “colour line”) was firmly established in business, travel, education, jobs, and housing. The African American populace never backed down. They formed benevolent societies, fraternal organisations, and sisterhoods. Free blacks formed their own churches. Bishop Charles Mason was the first to preach to integrated congregations (referring to mixed race churches). These churches gave rise to the sound and spread of gospel music.

Mahalia Jackson, a famed gospel singer, was also a civil rights activist. She was known for her soul-stirring rendition of “Precious Lord”, which was Martin Luther King, Jr.’s favourite hymn. The tunes of blues music, too, originated in the songs of field workers and the music of rural black churches. BB King, a blues maestro, said that blues songs were “an expression of anger against shame and humiliation”. These exhibits also lead visitors to a poignant section on Mahatma Gandhi and India’s Civil Disobedience movement, which heavily inspired Martin Luther King Jr.’s initiatives and activism.

As racial violence and segregation in public life grew, activists stood up and made history. An interesting and interactive exhibit displays a year-long bus boycott in the city of Montgomery in Alabama. Rosa Parks, a black woman, like others in her community, hated bus segregation. She was arrested for refusing to give up her seat for a white man. There’s a life-size bus in which people can sit next to Rosa Parks while the conductor tells them to “move to the back”. Other exhibits outline the rise of Malcolm X, racial integration in schools (and the first black children to be granted admission in schools with white children), the sit-ins organised by young adults to protest silently in a non-violent way by “sitting” at the white-owned restaurants where they were refused service, and the writing and scoring of the song “we shall overcome”. The final exhibit is right in the Martin Luther King, Jr.’s motel room with some of his belongings and a reflection of his last moments.

The National Civil Rights Museum is counted in the top 5 per cent of institutions to be accredited by the American Alliance of Museums. It is also a founding member of the International Coalition of Sites of Conscience, which brings together museums and institutions from across the world that connect past struggles with present movements that advocate social justice.