Manaku’s illustration of Bhagavata Purana is dazzling, but this one section about King Prithu stands out for its detailed and dense narration 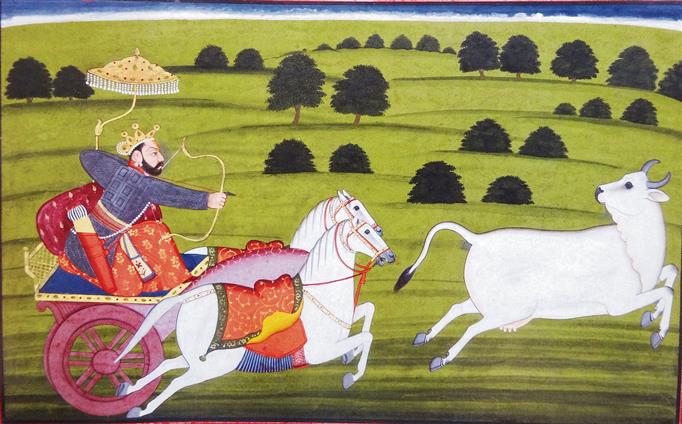 King Prithu in pursuit of the Earth-Cow

When Prithu, the First among All Kings, ascended the throne — having succeeded his predecessor, Vena, ‘the committer of heinous sins’ — everyone gathered, ancient texts tell us, to greet him and offer obeisance: bards and sutas and charans, nobles and citizens, rivers and mountains, the sky and earth.

“You, O king,” voices rose from all directions, “are the protector of the established institutions of religion and morality; you are the punisher of those who are evil; you are impartial to all beings; you are firm in your vows, true to your words; a servant of aged people; the shelter of all beings; kind to the afflicted; affectionate to your subjects like a father…” High-minded and modest as he was, however, the great king spoke back. “Really competent persons and illustrious men abhor praise,” he said, addressing everyone. “We are still unknown in this world and have performed no exploits. How can we be so small-minded as to allow you to sing our glory?”

Wonderful as this passage is in itself, but, through it, one also approaches the threshold of all those discussions, and prescriptions, about the nature of monarchy in ancient India. Theories of kingship abound: Kautilya speaks at length about the duties and rights of a king; Manu in his Smriti lays an elaborate code out for the leader of men; Medhatithi keeps commenting on the situation; the ‘Divine Right of Kingship’ swirls around. But passages such as these — this one, somewhat abbreviated and edited as it is, comes from the Bhagavata Purana (skandha IV) — land us right in the middle of a complex theme; even let us breathe the air of those early times. But, apart from the serious limitations of my own competence, my intent here is not to bring in my bit to add to the welter of formulations, nor to arrive at any judgements. I wish only to pursue, briefly, the career of the great King Prithu here and see if it makes any contribution to the whole issue of kingship, especially of what a king needs to do in situations of great stress.

Myth, but extremely meaningful myth, takes over here. As we explore the relevant sections in the Bhagavata Purana, we come to a point where great crowds of the subjects of the great King approach him, “their bodies emaciated with hunger”, saying that the earth has stopped yielding her bounties to them. “You are”, they appealed to the King, “our protector, bestower of the means of our livelihood”, and it is you who “should endeavour to supply food to us who are famished with hunger.” Hearing them, and seeing the abject state they were reduced to, the King was greatly enraged. How can, he thought to himself, the earth turn so niggardly, and hold up “the seeds of herbs, plants, and food-grains within herself”? He got up, “like wrath incarnate”, took up his bow and, fitting an arrow on it, aimed it at the earth. Seeing the king “with his weapon uplifted’, she, the earth, began to tremble. Suddenly she assumed the form of a cow and in terror began to run away, “fast like a terrified female deer chased by a hunter”.

One needs to stop here, briefly, to remind oneself that the word in Sanskrit for the earth, and for a cow, is the same: “go”. The riches of the language are such that this simple word holds many meanings, but for the moment one stays with the thought that the word connotes both earth and cow. King Prithu followed the ‘Earth-Cow” wherever she went — “in all directions, and intermediate directions, to the heaven and the earth and in the space between them”, his ‘lips quivering with rage’ all the time. Eventually he overpowered her. When thus reduced, the Cow threw herself at the mercy of the King. She also tried to explain her conduct: ‘I swallowed up all those herbs and plants and food-grains, because they were falling in the hands of thieves and exploiters,’ she said. ‘But now that I am in your hands,’ she continued, ‘I will yield all that is inside me. Milk me, and ask all your subjects also to milk me according to their needs and their wont.’

The King then, the account states, stationed the Earth-Cow in the garden of his palace and invited all creatures — gods and daityas, siddhas and sages, semi-divines and yakshas, beasts and reptiles, trees and mountains — to come and take from her whatever they cherished. They all did, bringing their own calves and their milk-pots, under the eyes directly of the King who supervised everything. This done, the king began, mighty bow in hand, to level the earth himself, for it to become habitable. And on the newly levelled surfaces, he began to construct everything: “villages, towns, cities, forts and castles of different types”; he built “abodes for cowherds, camping grounds and quarries; agricultural habitations and hamlets on hillsides”. Such, the Purana says, concluding this section, was this great and noble King: Prithu. It is after his name that the earth is called Prithvi.

This whole account, as one can see, is rich; conceived with wonderful imagination. But there also is a dazzling visual counterpart of it that has fortunately survived. In the middle of the 18th century, the great Bhagavata Purana was taken up for illustration by that remarkably gifted painter, Manaku of Guler. When he came to the section that one has spoken of, Manaku seems to have got completely absorbed, and simply soared with it, devoting a whole series to the theme — some 20 folios in dense narration, picking every little thing in dazzling detail. One sees, in this series of paintings, King Prithu in pursuit of the Earth-Cow, all subjects of the King ‘milking’ her — now semi-divines, now beasts, now reptiles, the King levelling the earth with his own hands, and constructing on it villages and towns, forts and castles, dams and waterways: kingly duties all.

Myths, they say, can teach. Here is one that does, while serving as a reminder of what a king/leader needs always to keep in sight: alleviate suffering, pursue a goal single-mindedly, be merciful, view everyone with an even eye, and be wary of idle praise.

King Prithu pursuing the Earth-Cow, which is in the Museum of Fine Arts, Boston, are from Rajasthan Oriental Research Institute, Jodhpur